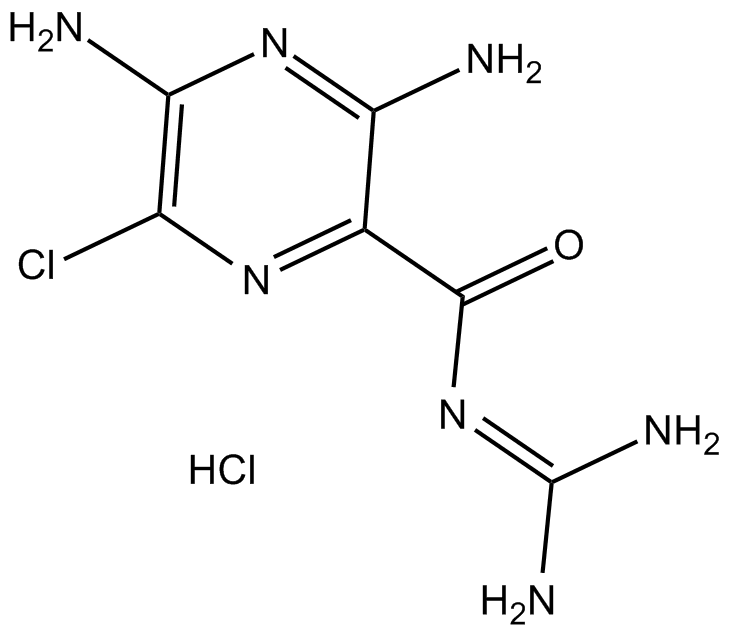 The epithelial sodium channel (ENaC) is a membrane-bound ion-channel that is permeable to protons, Li+-ions, and especially Na+-ions. It is a constitutively active ion-channel. It can be argued that it is the most selective ion channel. In vertebrates, the channels control reabsorption of sodium in kidney, colon, lung and sweat glands. They also play a role in taste perception. Amiloride is a relatively selective inhibitor of the epithelial sodium channel (ENaC).

In vivo: Amiloride at 1 mg/kg/day is found to reverse the initial increases in collagen deposition and prevent further increases in the DOCA-salt hypertensive rat. Amiloride delays the onset of proteinuria and improved brain and kidney histologic scores in the stroke-prone spontaneously hypertensive rats. Amiloride antagonizes or prevents actions of aldosterone in cardiovascular and renal tissues in animals with salt-dependent forms of hypertension [1].

Clinical trial: Amiloride is a potassium-sparing diuretic, first approved for use in 1967, used in the management of hypertension and congestive heart failure. Amiloride was also tested as treatment of cystic fibrosis, but it was revealed inefficient in vivo due to its short time of action.