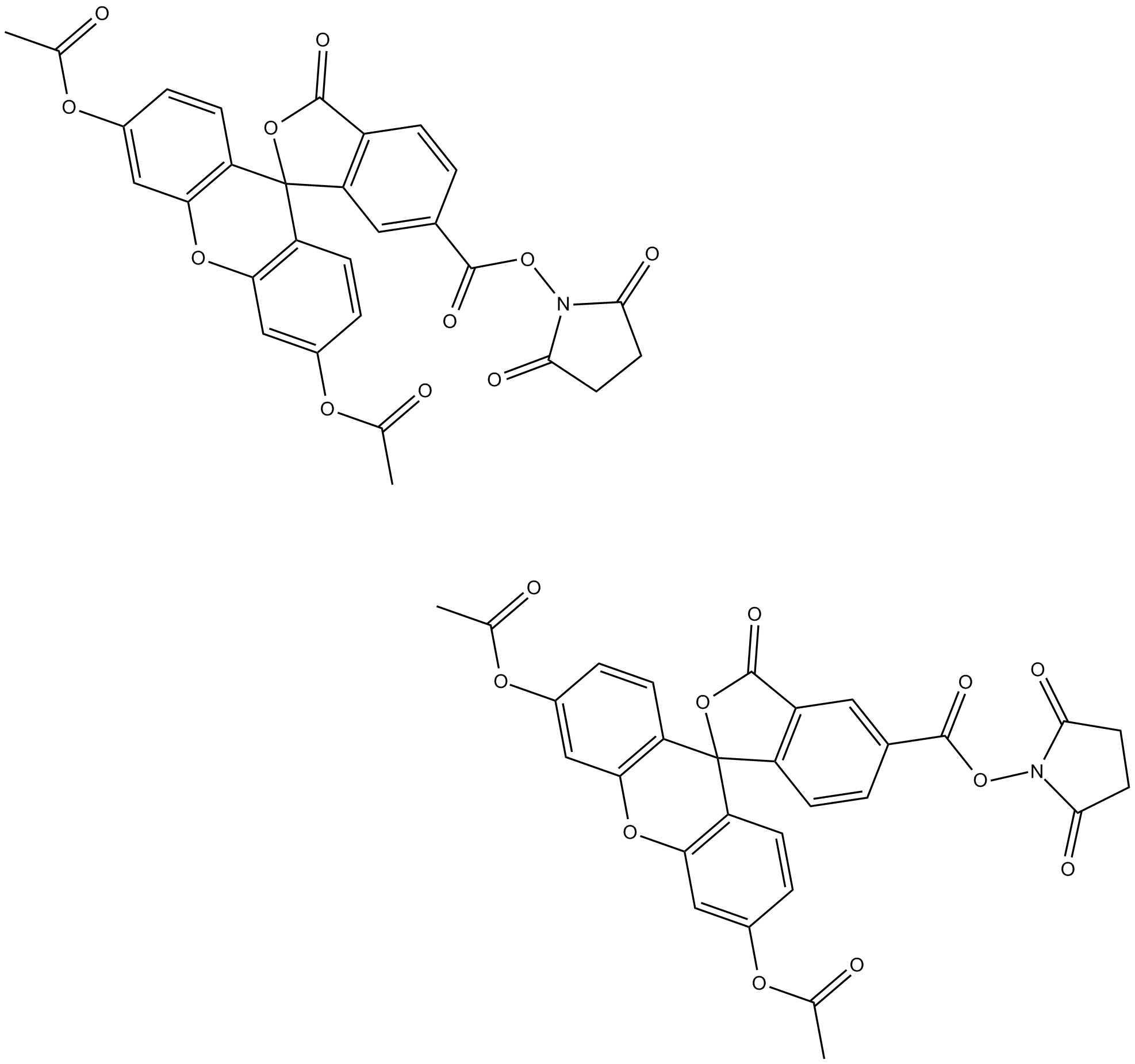 The fluorescence of CFDA-SE -labeled cells was very uniform and stable, and the fluorescence could be evenly distributed to the two progeny cells [4]. CFDA-SE can deliver strong green fluorescence,Ex=494 nm,Em=521nm. It cannot penetrate the cell membrane, can be inside the cell intact retention CFDA-SE can not accidental reversibly and intracellular protein Lysine residues or other amino binding reaction occurs, thus tag on these proteins.

In Human erythroleukaemic cell line K562, and other cell lines, although all cells are labeled with relatively high fluorescence intensity by CFDA-SE, the efficiency of labeling is highly variable[3].Electron dense vesicles are seen at the ultrastructural level in labeled cells. Discrete vesicular labeling can also be observed in whole cell mounts viewed with fluorescence microscopy. Whole cells retain good label for 6 weeks. CFDA-SE labeling is relatively easy, nontoxic to cells and nonradiocactive[2].

In vitro lymphocyte cell proliferation analysis by CFDA-SE method is a reliable and practical choice for the assessment of mitogenic T lymphocyte responses in yet unclassified PID patients for targeting further genetical analyses[6].When NM is detected by flow cytometry, FL1 detection channel CFDA-SE -labeled cells can be adopted, and fluorescence microscopy can also be used to observe CFDA-SE -labeled cells without staining adjacent cells [8].

CFDA-SE has been reported to be effective in labeling CD34+ cells, CD34+ cells isolated from fetal liver or thymus were labeled with CFDA-SE and were injected into a human thymus grafted subcutaneously in the RAG-2 / IL-2Rγ / mice. One to 4 weeks later the CFDA-SE label was found not only in T cells but also in CD123+/high CD4+CD45RA+ pDC2, indicating that the CD34+ cells can develop into pDC2 within a thymus. In addition to pDC2, CFDA-SE -labeled dendritic cells with a mature phenotype, determined by the cell surface markers CD11c, CD83, and CD80, were found in the injected human thymus graft. pDC2 was not found in the periphery of mice carrying a human thymic graft, indicating that the intrathymic pDC2 failed to emigrate from the thymus[5]. In C57BL/6 mice，CFDA-SE, at 80 times the concentration used for in vitro labeling, was nontoxic and labeled randomly approximately 15% of thymocytes 24 h after injection. The turnover rate of labeled thymic emigrants in the lymph nodes was in the order of 21 days. Thus, CFDA-SE may serve as a powerful tool in relatively long-term migration studies[7].

Objective: To explore the application of carboxyfluorescein diacetate succinimidyl ester (CFDA-SE) and MACSiBeads™ Particles within in vitro suppression assays of regulatory T (Treg) cells.
Methods: CD4+CD25+ Treg cells and CD8+ T cells were sorted using magnetically activated cell sorting. CD8+ T cells were subjected to CFDA-SE staining to determine their optimal staining concentration. MACSi-Beads™ Particles, a component of the Treg expansion kit, were used as stimulators in suppression assays. Five experimental groups were set based on the condition of MACSiBeads™ Particles, CFDA-SE staining and cell composition of co-culture system, which were stimulated CD8+ cells without CFDA-SE staining, unstimulated CD8+ cells with CFDA-SE staining, stimulated CD8+ cells with CFDA-SE staining, co-cultured with Treg cells at a ratio of 1:0.25, 1:0.125 and 1:0, respectively. Flow cytometry was performed using the BD FACS Canto™ and flow data was analyzed using FCS Express 4 Plus software.
Results: CFSE fluorescence intensity correlated with cell type and culture time. The final CFDA-SE staining concentration was 0.5μM. Within in vitro suppression assays, Treg cells showed a significant inhibitory effect on the proliferation of CD8+ T cells increasing as its concentration increased.
Conclusion: CFDA-SE combined with MACSiBeads™ Particles can be used to evaluate the in vitro inhibition effect of Treg cells.

Intravital fluorescence microscopy (IVM) is a predestined tool for investigating the fate of leukocytes during the process of leukocyte recruitment. In the present study, the commonly used dye for this purpose, rhodamine 6G, and carboxyfluorescein diacetate succinimidyl ester (CFDA-SE) were compared for leukocytes labelling with respect to suitability for IVM studies. Their potential in labelling different leukocytes subpopulations as well as their fluorescence intensities were assessed by flow cytometry revealing distinct differences between both dyes. These differences had a profound impact on their application for in vivo imaging of leukocyte-endothelium interactions. In summary, CFDA-SE revealed superior in labelling leukocytes for in vivo microscopy with respect to image quality. In addition, we could show the efficiency of CFDA-SE also under disease condition in an animal model of sepsis.