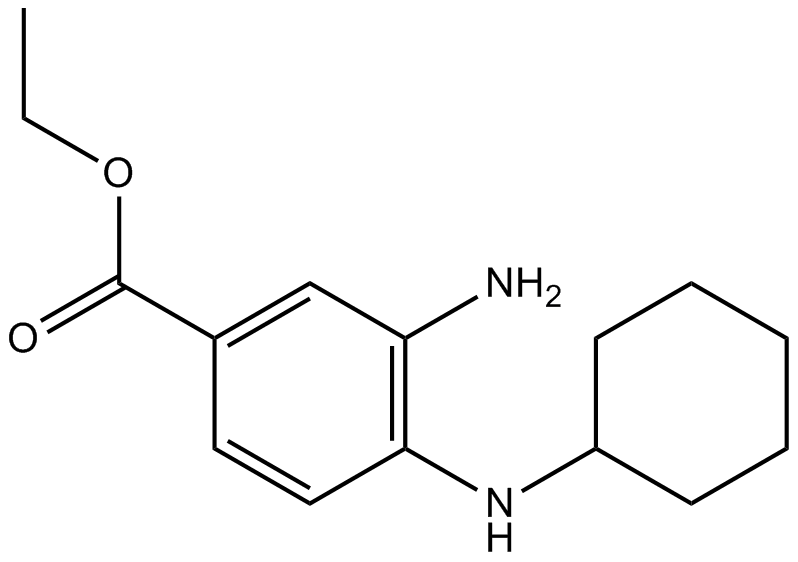 Ferrostatin-1 is a potent inhibitor of ferroptosis with an EC50 of 60 nM.

Ferrostatin-1, a specific inhibitor of ferroptosis, was Administrated to prevent neuronal death and reduced iron deposition induced by hemoglobin in organotypic hippocampal slice cultures (OHSCs). Mice treated with ferrostatin-1 after ICH exhibited marked brain protection and improved neurologic function. Additionally, Ferrostatin-1 reduced lipid reactive oxygen species production and attenuated the increased expression level of PTGS2 and its gene product cyclooxygenase-2 ex vivo and in vivo. For in vivo experiments, Ferrostatin-1 was injected 1 pmol (10 μM Ferrostatin-1 in 1 μl 0.01% DMSO in saline) into the striatum immediately after collagenase injection or into the cerebral ventricle 2 hours after collagenase injection. The coordinates for cerebral ventricle injection were: 1.0 mm lateral, 0.5 mm posterior, and 2.5 mm in depth relative to the bregma. [2]

Background: Ferroptosis is a newly recognized type of cell death, which is different from traditional necrosis, apoptosis or autophagic cell death. However, the position of ferroptosis in lipopolysaccharide (LPS)-induced acute lung injury (ALI) has not been explored intensively so far. In this study, we mainly analyzed the relationship between ferroptosis and LPS-induced ALI.
Methods: In this study, a human bronchial epithelial cell line, BEAS-2B, was treated with LPS and ferrostatin-1 (Fer-1, ferroptosis inhibitor). The cell viability was measured using CCK-8. Additionally, the levels of malondialdehyde (MDA), 4-hydroxynonenal (4-HNE), and iron, as well as the protein level of SLC7A11 and GPX4, were measured in different groups. To further confirm the in vitro results, an ALI model was induced by LPS in mice, and the therapeutic action of Fer-1 and ferroptosis level in lung tissues were evaluated.
Results: The cell viability of BEAS-2B was down-regulated by LPS treatment, together with the ferroptosis markers SLC7A11 and GPX4, while the levels of MDA, 4-HNE and total iron were increased by LPS treatment in a dose-dependent manner, which could be rescued by Fer-1. The results of the in vivo experiment also indicated that Fer-1 exerted therapeutic action against LPS-induced ALI, and down-regulated the ferroptosis level in lung tissues.
Conclusions: Our study indicated that ferroptosis has an important role in the progression of LPS-induced ALI, and ferroptosis may become a novel target in the treatment of ALI patients.

Insight into the mechanism of ferroptosis inhibition by ferrostatin-1

Ferroptosis is a form of cell death primed by iron and lipid hydroperoxides and prevented by GPx4. Ferrostatin-1 (fer-1) inhibits ferroptosis much more efficiently than phenolic antioxidants. Previous studies on the antioxidant efficiency of fer-1 adopted kinetic tests where a diazo compound generates the hydroperoxyl radical scavenged by the antioxidant. However, this reaction, accounting for a chain breaking effect, is only minimally useful for the description of the inhibition of ferrous iron and lipid hydroperoxide dependent peroxidation. Scavenging lipid hydroperoxyl radicals, indeed, generates lipid hydroperoxides from which ferrous iron initiates a new peroxidative chain reaction. We show that when fer-1 inhibits peroxidation, initiated by iron and traces of lipid hydroperoxides in liposomes, the pattern of oxidized species produced from traces of pre-existing hydroperoxides is practically identical to that observed following exhaustive peroxidation in the absence of the antioxidant. This supported the notion that the anti-ferroptotic activity of fer-1 is actually due to the scavenging of initiating alkoxyl radicals produced, together with other rearrangement products, by ferrous iron from lipid hydroperoxides. Notably, fer-1 is not consumed while inhibiting iron dependent lipid peroxidation. The emerging concept is that it is ferrous iron itself that reduces fer-1 radical. This was supported by electroanalytical evidence that fer-1 forms a complex with iron and further confirmed in cells by fluorescence of calcein, indicating a decrease of labile iron in the presence of fer-1. The notion of such as pseudo-catalytic cycle of the ferrostatin-iron complex was also investigated by means of quantum mechanics calculations, which confirmed the reduction of an alkoxyl radical model by fer-1 and the reduction of fer-1 radical by ferrous iron. In summary, GPx4 and fer-1 in the presence of ferrous iron, produces, by distinct mechanism, the most relevant anti-ferroptotic effect, i.e the disappearance of initiating lipid hydroperoxides.

Ferroptosis is a type of programmed cell death dependent on iron. It is different from other forms of cell death such as apoptosis, classic necrosis and autophagy. Ferroptosis is involved in many neurodegenerative diseases. The role of ferroptosis in glutamate-induced neuronal toxicity is not fully understood. To test its toxicity, glutamate (1.25-20 mM) was applied to HT-22 cells for 12 to 48 hours. The optimal experimental conditions occurred at 12 hours after incubation with 5 mM glutamate. Cells were cultured with 3-12 μM ferrostatin-1, an inhibitor of ferroptosis, for 12 hours before exposure to glutamate. The cell viability was detected by 3-(4,5-dimethylthiazol-2-yl)-2,5-diphenyltetrazolium bromide assay. Autophagy was determined by monodansylcadaverine staining and apoptosis by caspase 3 activity. Damage to cell structures was observed under light and by transmission electron microscopy. The release of lactate dehydrogenase was detected by the commercial kit. Reactive oxygen species were measured by flow cytometry. Glutathione peroxidase activity, superoxide dismutase activity and malondialdehyde level were detected by the appropriate commercial kit. Prostaglandin peroxidase synthase 2 and glutathione peroxidase 4 gene expression was detected by real-time quantitative polymerase chain reaction. Glutathione peroxidase 4 and nuclear factor erythroid-derived-like 2 protein expression was detected by western blot analysis. Results showed that ferrostatin-1 can significantly counter the effects of glutamate on HT-22 cells, improving the survival rate, reducing the release of lactate dehydrogenase and reducing the damage to mitochondrial ultrastructure. However, it did not affect the caspase-3 expression and monodansylcadaverine-positive staining in glutamate-injured HT-22 cells. Ferrostatin-1 reduced the levels of reactive oxygen species and malondialdehyde and enhanced superoxide dismutase activity. It decreased gene expression of prostaglandin peroxidase synthase 2 and increased gene expression of glutathione peroxidase 4 and protein expressions of glutathione peroxidase 4 and nuclear factor (erythroid-derived)-like 2 in glutamate-injured HT-22 cells. Treatment of cultured cells with the apoptosis inhibitor Z-Val-Ala-Asp (OMe)-fluoromethyl ketone (2-8 μM), autophagy inhibitor 3-methyladenine (100-400 μM) or necrosis inhibitor necrostatin-1 (10-40 μM) had no effect on glutamate induced cell damage. However, the iron chelator deferoxamine mesylate salt inhibited glutamate induced cell death. Thus, the results suggested that ferroptosis is caused by glutamate-induced toxicity and that ferrostatin-1 protects HT-22 cells from glutamate-induced oxidative toxicity by inhibiting the oxidative stress.

Background and purpose: Inflammation and ferroptosis in astrocytes can be induced by external injuries, which results in excessive production of inflammatory factors and further injury on neurons. Alleviating ferroptosis might be an effective way to protect the brain from external injuries. The present study aims to explore the protective effects of Ferrostatin-1 against ferroptosis induced by Angiotensin II and the underlying mechanism.
Methods: The mouse primary astrocytes were isolated from the cortices of mice. The astrocytes were stimulated using 10 µM angiotensin II in the presence or absence of 1 or 2 μM Ferrostatin-1. The gene expression levels of AT1R, IL-6, IL-1β, COX-2, GFAP, and GPx4 were evaluated using qRT-PCR. Western Blot was used to determine the protein levels of AT1R, COX-2, GFAP, GPx4, Nrf2, and HO-1 and ELISA was used to detect the concentrations of IL-6, IL-1β, and PGE2. The ROS levels were evaluated using DHE staining and the reduced GSH level was determined using GSH detection kits.
Results: The expression levels of AT1R, IL-6, IL-1β, COX-2, and GFAP in the astrocytes were significantly elevated by stimulation with Ang II and greatly suppressed by the introduction of Ferrostatin-1 in a dose-dependent manner. The promoted ROS level and inhibited GSH level in the astrocytes by the stimulation with Ang II were significantly reversed by Ferrostatin-1. Down-regulated GPx4, Nrf2, and HO-1 in the astrocytes induced by Ang II were extremely up-regulated by the treatment of Ferrostatin-1 in a dose-dependent manner.
Conclusion: Ferrostatin-1 alleviates angiotensin II (Ang II)- induced inflammation and ferroptosis by suppressing the ROS levels and activating the Nrf2/HO-1 signaling pathway.