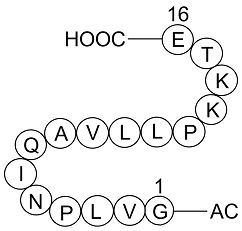 Histone-H2A-(107-122)-Ac-OH, (C81H140N20O23), a peptide with the sequence Ac-Gly-Val-Leu-Pro-Asn-Ile-Gln-Ala-Val-Leu-Leu-Pro-Lys-Lys-Thr-Glu-OH, MW= 1762.1. Histone H2Ais one of the five main histone proteins involved in the structure of chromatin in eukaryotic cells. Histones are proteins that package DNA into nucleosomes1. Histones are responsible for maintaining the shape and structure of a nucleosome. One chromatin molecule is composed of at least one of each core histones per 100 base pairs of DNA. There are five families of histones known to date; these histones are termed H1/H5, H2A, H2B, H3, and H42.H2A is important for packaging DNA into chromatin. Since H2A packages DNA molecules into chromatin, the packaging process will effect gene expression.H2A has been correlated with DNA modification and epigenetics. H2A plays a major role in determining the overall structure of chromatin. Inadvertently, H2A has been found to regulate gene expression3. DNA modification by H2A occurs in the cell nucleus. Proteins responsible for nuclear import of H2A protein are karyopherin and importin. Recent studies also show that nucleosome assembly protein 1 is also used to transport of H2A into the nucleus so it can wrap DNA. Other functions of H2A have been seen in the histone variant H2A.Z. This variant is associated with gene activation, silencing and suppression of antisense RNA. In addition, when H2A.Z was studied in human and yeast cells, it was used to promote RNA polymerase II recruitment4.