KRN 7000 (α-GalCer) is a synthetic glycolipid with antitumorial and immunostimulatory. 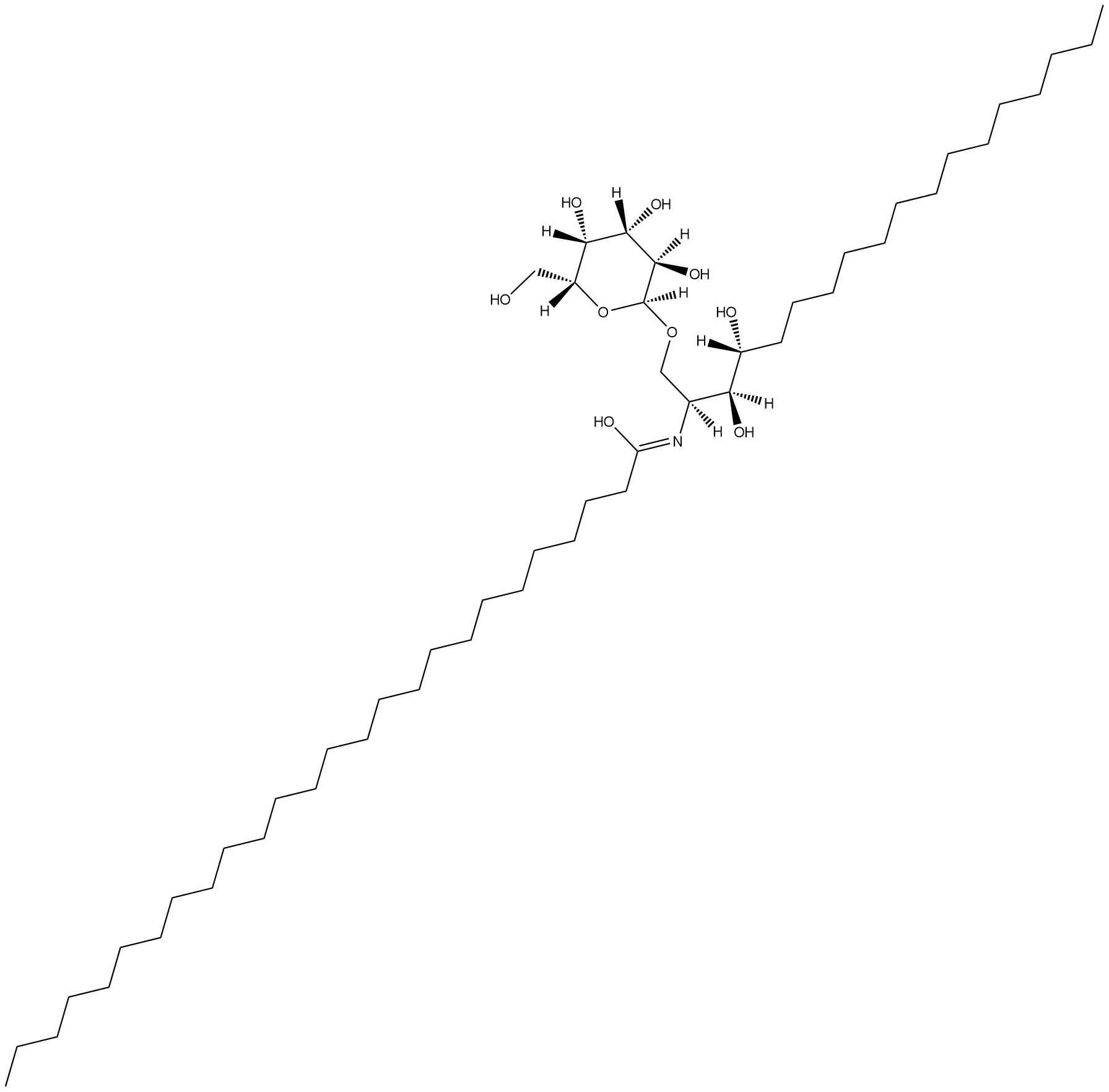 KRN7000[(2S,3S.4R)-l-O-(a-D-galactopyranosyl)-2-(N-hexacosanoylamino)-l,3.4-octadecanetriol] is a highly potent synthetic alpha-galactose ceramide originally isolated from an ocean sponge that is widely used in the study of tumors and autoimmune diseases due to its ability to specifically present CD1d on the cell surface and thus activate NKT cells.[1] KRN7000 is a potent activator of antigen-presenting cells which leads to stimulation of immunoregulatory cells such as T cells, natural killer T cells (NKT), and macrophages.[3]

In vitro study indicated that KRN7000 can be recognized by NKT-cell clones and can trigger proliferation, cytokine release (IL-4 and IFN-c) and cytotoxic activity. KRN7000 decreased in the percentage of Va24+ Vb11+T cells expressing CD161, indicating that CD161 does not play a major role in the cytotoxicity mediated by KRN7000-activated Va24+ Vb11+ T cells. Moreover, KRN7000-cultured Va24+Vb11+ T cells strongly expressed CD25 (IL-2Ra), it can be expected that cytokines targeting the IL-2R will have potent effects on the expansion of Va24+ Vb11+ T cells.[2]

In vivo study demonstrated that KRN7000 prevented GVHD onset in F1 mice inoculated with haploidentical C57 splenocytes with no apparent toxicity. This treatment results in the maintenance of a healthy profile and body weight and also prevents other clinical signs of GVHD. In vivo treatment with KRN7000 resulted in stimulation of the NK1.1+T cell subset, which is implicated in the suppression of immune responses directed against autoantigens and induction of tumor immunity. KRN7000 treatment in vivo also led to increased production of IL-4. Which suggests that KRN7000 treatment in vivo might prevent the onset of GVHD through upregulation of IL-4 production.[3]

KRN 7000 is a potent synthetic α-galactosylceramide, which, in association with the antigen-presenting CD1d protein, activates NKT immune cells. As these cells have important roles in the rejection of malignant tumors and in the regulation of several autoimmune diseases, KRN 7000 has activity in many diseases, including cancer, lupus, diabetes, malaria, and tuberculosis.

KRN7000 is inherently an extremely hydrophobic molecule, therefore, almost all the methods for solubilizing this material in primarily aqueous media will contain at least some detergent. For cell culture or other in vivo models, it is recommended that the KRN7000 be initially dissolved in a 2:1 mixture of chloroform and methanol. This solution should then be aliquoted into amounts suitable for a day’s use into glass vials. After aliquoting, the chloroform/methanol solvent can be evaporated off under a stream of nitrogen or argon. We recommend turning the tube during this process to try to get the KRN7000 deposited in as thin a film as possible. The thinner the KRN7000 layer is, the easier it will be to reconstitute it. These dry aliquots can then be stored under nitrogen or argon at -20°C for several months or until needed.

On the day of the experiment, use a dried aliquot and reconstitute it using any of the options listed below:

PBS with 0.5% Tween-20. Note: It will be necessary to warm at 37°C and sonicate for 2 hours or more in a water bath sonicator in order to get the material to dissolve. Heating and sonication should be done immediately prior to every use.

100% DMSO (anhydrous). It is critical that the DMSO be completely anhydrous. Heating to 80°C may be necessary to get the KRN7000 to completely dissolve. Please note: while this method will produce a true clear solution in DMSO, the KRN7000 will be very likely to precipitate out as soon as the DMSO is diluted into aqueous media. It is recommended that the aqueous media the DMSO stock solution will be diluted in should contain 10% serum, or BSA and that the DMSO stock solution be diluted no more than 1/100. Depending upon the make-up of the aqueous buffer, there may well still be a precipitate, however the precipitate should eventually disappear with warming and repeated vortexing or sonication in a water bath sonicator. This may take some time and will likely need to be repeated each time an aliquot is thawed for use.

Depending upon the solvent system used and the final concentration of the KRN7000, the results may be either a true clear solution or a somewhat cloudy suspension. The cloudy suspensions are not a problem, and will work fine when treating cells, just make sure they are mixed well immediately before use.

The stimulating adventure of KRN 7000

Associated with the CD1d protein, KRN 7000, a potent synthetic α-galactosylceramide, is known to activate the invariant NKT immune cells. This stimulation then leads to the production of different cytokines modulating a T(H)1/T(H)2 immune response balance involved in protection against several pathologies such as autoimmune diseases and cancers. Various efforts have been made toward the synthesis of simple and more functionalized analogues in order to selectively induce T(H)1 or T(H)2-type cytokine production. Since the discovery of KRN 7000, structure-activity relationships, crystallographic and modelling studies have pointed to the potential of several GalCer analogues in term of selective bioactivity, and have highlighted interesting elements in order to better understand the recognition and activation mechanisms of immune iNKT cells. By presenting an up-to-date library of analogues, collecting recent breakthroughs done in crystallography and molecular modelling, and relating them to the available biological results, we hope that this review will highlight and help the scientific community in their KRN research.

The identification of immunoactive agents for clinical and mechanistic applications is a very active area of research. In this vein, analogues of the potent immunostimulant KRN 7000 with diverse cytokine profiles have attracted considerable attention. These compounds have been shown to activate iNKT cells via presentation by CD1d. Herein, we report on the synthesis and activity for four new C-glycosides of KRN 7000, 11-phenylundecanoyl and 11-p-fluorophenylundecanoyl derivatives of C-KRN 7000, 2,3-bis-epi-C-KRN 7000 and the reverse amide of C-KRN 7000. In mice, compared to C-KRN 7000, 2,3-bis-epi-C-KRN 7000 stimulated higher release of the anti-inflammatory cytokine IL-4 and lower release of the inflammatory cytokines IFN-γ and IL-12. The phenyl terminated alkanoyl and reverse amide analogues were inactive. These data suggest that structure activity effects for KRN 7000 are not necessarily additive and their use in the design of new analogues will require an improved understanding of how subtle structural changes impact on cytokine activity.