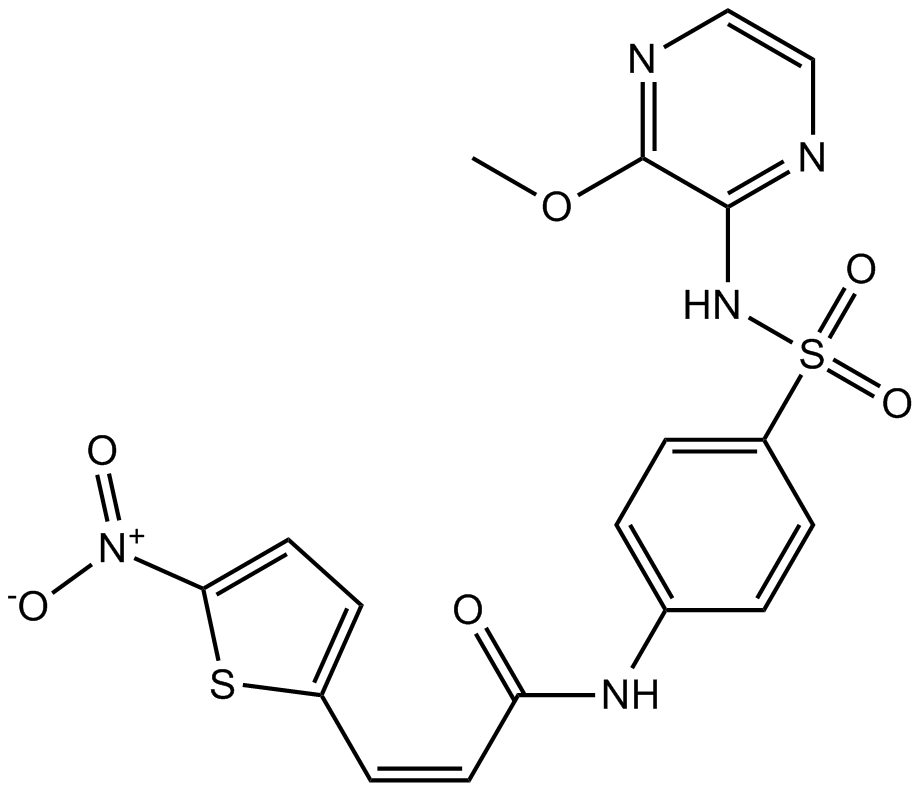 Necrosulfonamide (NSA) is a pharmacological inhibitor of mixed lineage kinase-like protein (MLKL) [1]. NSA is potent in protecting necrotic/necroptotic death of human HT-29 with an IC50 value of 124 nM [2].

MLKL, a functional RIP3 substrate, can bind to RIP3 through its kinase-like domain but it lacks kinase activity. MLKL can be phosphorylated by RIP3 at the T357 and S358 sites [3].

Treatment with NSA alone did not rescue cell death, while NSA significantly enhanced the protection of zVAD.fmk against BV6/5AC-induced cell death. In the same line, knockdown of MLKL did not significantly protect cells against BV6/5AC cotreatment in the absence of zVAD.fmk [1]. In the Dox-treated HeLa cells, NSA inhibited necrosis. With a higher level of RIP3, the allosteric inhibition of necrostatin-1 on RIP1 was overcome by cells. In contrast, NSA still efficiently prevented necrosis under this condition. Consistently, knockdown of MLKL also blocked necrosis. Under necrosis-inducing conditions, the presence of NSA made tubular mitochondrial morphology remain normal. Consistently the mitochondrial morphological changes were also prevented by the knockdown of MLKL [4]. Even at 5 μM concentration, NSA had no effect on the apoptosis induced by TNF-α plus Smac mimetic in non-RIP3-expressing Panc-1 cells. In the presence of NSA, the discrete RIP3 punctae were detected but failed to enlarge. That meant NSA blocked necrosis at a specific step in the necrosis pathway [3].