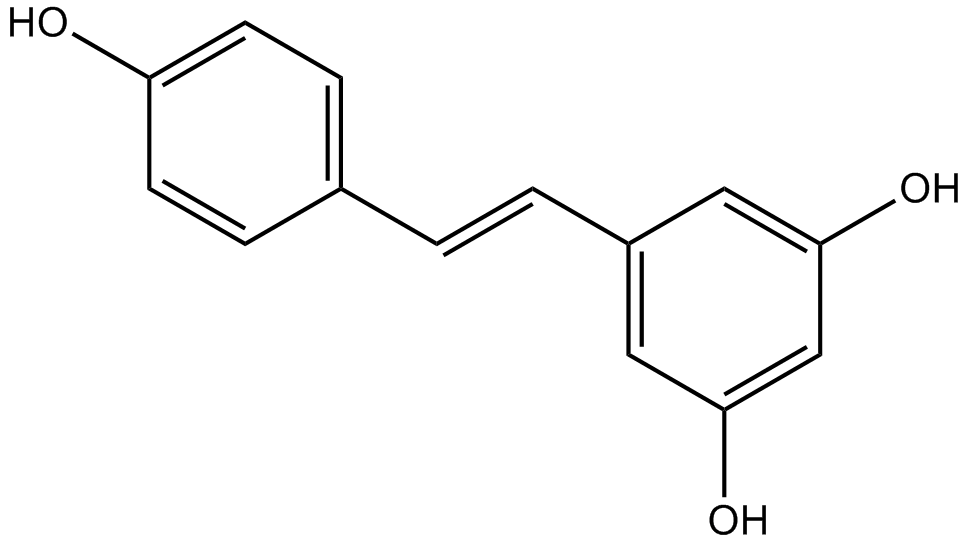 Resveratrol (trans-Resveratrol; SRT501) is one of the numerous polyphenolic compounds found in several vegetal sources In the vast majority of cases, Resveratrol displays inhibitory/activatory effects in the micromolar range, which is potentially attainable pharmacologically, although targets with affinities in the nanomolar range have also been reported[1]. MCF-7 cells are plated in DME-F12 medium supplemented with 5% FBS in the presence of increasing concentrations of Resveratrol. Control cells are treated with the same volume of vehicle only (0.1% ethanol). Resveratrol inhibits the growth of MCF-7 cells in a dose-dependent fashion. Addition of 10 μM Resveratrol results in an 82% inhibition of MCF-7 cell growth after 6 days while at 1 μM, only a 10% inhibition is observed. The cells treated with 10 μM Resveratrol have a doubling time of 60 hr whereas control cells doubled every 30 hr. Trypan blue exclusion assay shows that at concentrations of 10 μM or lower, Resveratrol does not affect cell viability (90% viable cells) whereas at 100 μM, only 50% of the cells are viable after 6 days of Resveratrol treatment. Moreover, MCF-7 cells do not undergo apoptosis after incubation with Resveratrol at concentration of 10 μM as determined by ApoAlert Annexin V Apoptosis kit[2].