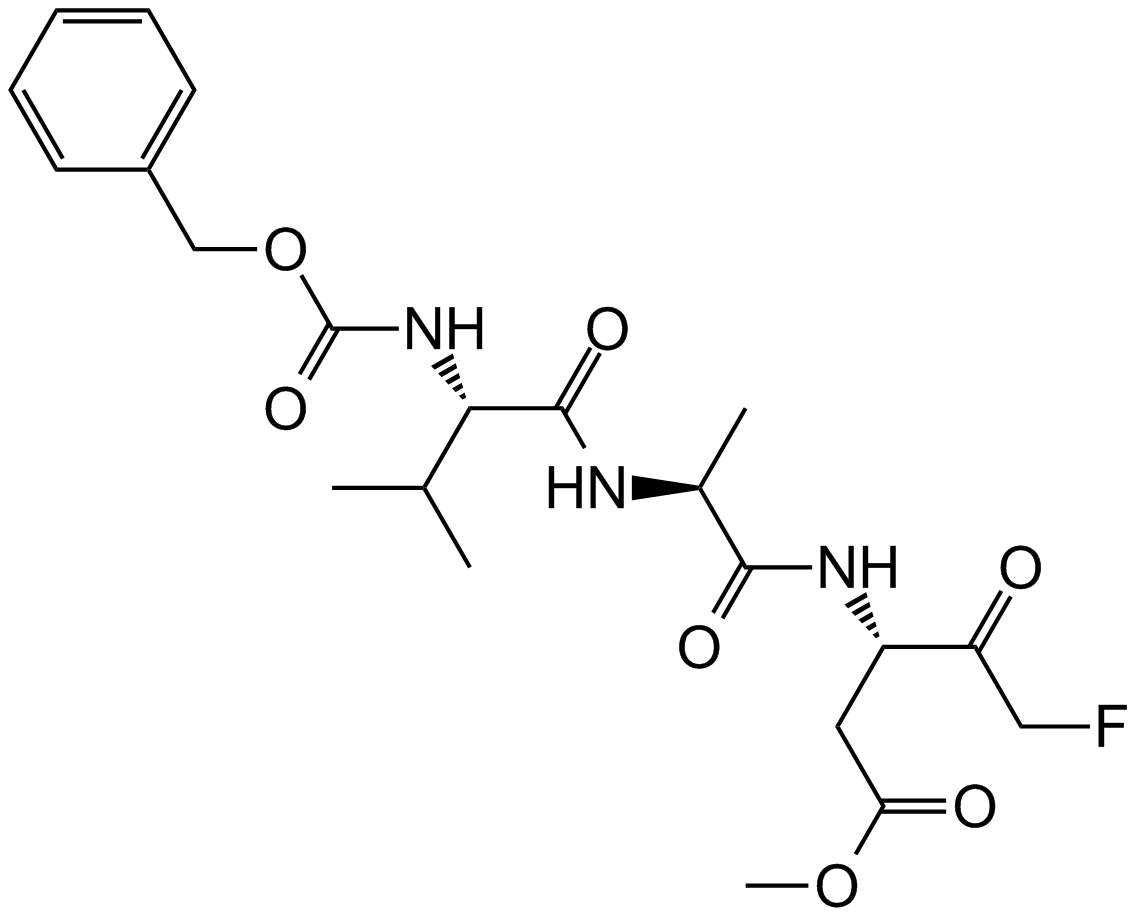 Z-VAD-FMK (Benzyloxycarbonyl-Val-Ala-Asp (OMe) fluoromethylketone), an ICE-like protease inhibitor, inhibits apoptosis by preventing the processing of CPP32 to its active form. [3]

Z-VAD-FMK, can be used to induce necroptosis under certain stimuli. Treatment of mice with Z-VAD-FMK could significantly reduce mortality and alleviate disease after lipopolysaccharide (LPS) challenge. Notably, in LPS-challenged mice, treatment with Z-VAD-FMK could also reduce the percentage of peritoneal macrophages by promoting necroptosis and inhibiting pro-inflammatory responses in macrophages. What’s more, pretreatment with Z-VAD-FMK promoted LPS-induced nitric oxide-mediated necroptosis of bone marrow-derived macrophages (BMDMs), leading to reduced pro-inflammatory cytokine secretion. Interestingly, Z-VAD-FMK treatment promoted the accumulation of myeloid-derived suppressor cells (MDSCs) in a mouse model of endotoxin shock, and this process inhibited LPS-induced pro-inflammatory responses in macrophages. Treatment with Z-VAD-FMK alleviates LPS-induced endotoxic shock by inducing macrophage necroptosis and promoting MDSC-mediated inhibition of macrophage activation. For in vivo experienment, the mice were pretreated or post-treated with Z-VAD-FMK (5, 10, and 20 μg/g of body weight) or vehicle (saline) for 2 h and endotoxic shock was induced by an intraperitoneal injection of LPS (10 μg/g of body weight) and saline was used as control. [2]

The aim of this study was to evaluate the treatment of bovine semen with the pan-caspase inhibitor benzyloxycarbonyl-Val-Ala-Asp-fluoromethyl ketone (Z-VAD-FMK), before or after freezing on semen quality. After the initial assessment, sperm from 4 bulls were pooled (Experiment 1) and cryopreserved in BioXcell containing 0, 20 and 100 μM Z-VAD-FMK. After thawing semen viability, motility, membrane integrity, as well as DNA fragmentation and ΔΨm were evaluated. In Experiment 2, bovine frozen/thawed sperm were incubated for 1 hr with 0, 20 and 100 µM Z-VAD-FMK before assessing the semen quality. The treatment with Z -VAD-FMK before cryopreservation improved post-thawing sperm motility compared to the control group (p < .05), while no differences were recorded in sperm viability and membrane integrity among groups (on average 86.8 ± 1.5 and 69.1 ± 1.4, respectively). Interestingly, at the highest concentration, DNA fragmentation decreased (p < .05), while the percentage of spermatozoa with high ΔΨm increased (p < .05). The results of Experiment 2 showed that 1-hr treatment with Z-VAD-FMK did not affect sperm motility and viability (on average 63.4 ± 5.8 and 83.7.1 ± 1.2, respectively). However, Z-VAD-FMK improved sperm membrane integrity (p < .05) and at the highest concentration tested decreased the proportion of sperm showing DNA fragmentation (p < .05). No differences were recorded in the percentage of spermatozoa with high ΔΨm (on average 57.0 ± 11.4). In conclusion, the treatment with 100 µM of the caspase inhibitor Z-VAD-FMK before freezing increased bovine sperm mass motility and ΔΨm, while decreasing sperm DNA fragmentation. Treatment of semen after thawing with 100 µM Z-VAD-FMK improved sperm membrane integrity and reduced DNA fragmentation.

Purpose: To evaluate the efficiency of ovarian tissue treatment with Z-VAD-FMK, a broad-spectrum caspase inhibitor, to prevent follicle loss induced by ischemia/reperfusion injury after transplantation.
Methods: In vitro, granulosa cells were exposed to hypoxic conditions, reproducing early ischemia after ovarian tissue transplantation, and treated with Z-VAD-FMK (50 μM). In vivo, cryopreserved human ovarian fragments (n = 39) were embedded in a collagen matrix containing or not Z-VAD-FMK (50 μM) and xenotransplanted on SCID mice ovaries for 3 days or 3 weeks.
Results: In vitro, Z-VAD-FMK maintained the metabolic activity of granulosa cells, reduced HGL5 cell death, and decreased PARP cleavage. In vivo, no improvement of follicular pool and global tissue preservation was observed with Z-VAD-FMK in ovarian tissue recovered 3-days post-grafting. Conversely, after 3 weeks of transplantation, the primary follicular density was higher in fragments treated with Z-VAD-FMK. This improvement was associated with a decreased percentage of apoptosis in the tissue.
Conclusions: In situ administration of Z-VAD-FMK slightly improves primary follicular preservation and reduces global apoptosis after 3 weeks of transplantation. Data presented herein will help to guide further researches towards a combined approach targeting multiple cell death pathways, angiogenesis stimulation, and follicular recruitment inhibition.

It is recognized that ovarian follicular atresia is associated with apoptosis, and the most important effector of cell death is caspase-3. The aim of this study was to investigate the influence of anti-apoptotic drug Z-VAD-FMK on in vitro follicle growth in the domestic dog. Ovaries were obtained from peri-pubertal and adult domestic dogs, and cortical fragments recovered and incubated on 1.5% (w/v) agarose gel blocks within a 24-well culture plate containing Minimum Essential Medium Eagle-Alpha Modification (αMEM) supplemented with 4.2 μg/mL insulin, 3.8 μg/mL transferrin, 5 ng/mL selenium, 2 mM L-glutamine, 100 μg/mL of penicillin G sodium, 100 μg/mL of streptomycin sulfate, 0.05 mM ascorbic acid, 10 ng/mL of FSH and 0.1% (w/v) polyvinyl alcohol in humidified atmosphere of 5% CO2 and 5% O2. The cortices were randomly allocated in six treatments: 1) 10 ng/mL EGF (EGF V0); 2) 10 ng/mL of EGF plus 1 mM Z-VAD-FMK (EGF V1); 3) 10 ng/mL of EGF and 10 mM Z-VAD-FMK (EGF V10); 4) 1 mM Z-VAD-FMK; 5) 10 mM Z-VAD-FMK and (6) no EGF and Z-VAD-FMK supplementation (Control). The cortices were processed for histology and assessed for viability (based on morphology), density of structurally normal follicles, and diameter immediately after collection (non-culture Control) or after 3 or 7 days of in vitro incubation. Evaluation of mRNA expression of Cas3 in fresh cortices and those incubated for 3 days was performed using real-time PCR. Histological analysis revealed that in vitro incubation decreased (P < 0.05) follicle viability and density compared to the fresh, non-culture control. Addition of 10 μM of Z-VAD-FMK alone to the culture medium sustained follicle viability at Day 3, but did not impact follicle diameter when compared to the other treatment groups (p < 0.001); however, the beneficial benefit of this anti-apoptotic drug diminished after 7 days of incubation. Furthermore, Z-VAD-FMK supplementation did not impact Cas3 expression. The findings demonstrated that dog ovarian tissues are highly susceptible to in vitro incubation and Z-VAD-FMK supported short-term survival of dog follicles enclosed within the ovarian cortex.