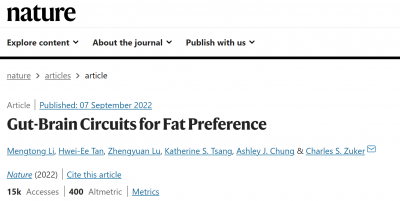 The perception of fat triggers a strong appetite and refinement response. Fat stimulation induces behavioral attraction even in the absence of a functional taste system. The results suggest that fat acts through the gut-brain axis after ingestion to drive fat preference. Using single-cell data, we identified vagal cells that respond to gut fat delivery and showed that genetic silencing of this gut-brain circuit abolished the development of fat preference.

The licensed drug rapamycin has the potential to be repurposed for geriatric protection. A key challenge is avoiding the undesirable side effects of continuous dosing. The findings suggest that the geriatric protective effects of chronic rapamycin treatment can be obtained with brief drug pulses during early adulthood in female flies and mice. In Drosophila, brief early rapamycin treatment in adults extended lifespan and reduced age-related gut decline to the same extent as lifelong administration. Long-lasting memory of early treatment was mediated by enhanced autophagy in enterocytes, accompanied by elevated intestinal LManV and lysozyme levels. The transient elevation of autophagy in early adulthood itself induces a long-term increase in autophagy. In mice, 3 months of early treatment induced memory effects even after 6 months of rapamycin discontinuation, maintaining lysozyme distribution, Man2B1 levels in intestinal crypts, Paneth cells similar to chronic treatment Structure and intestinal barrier function. 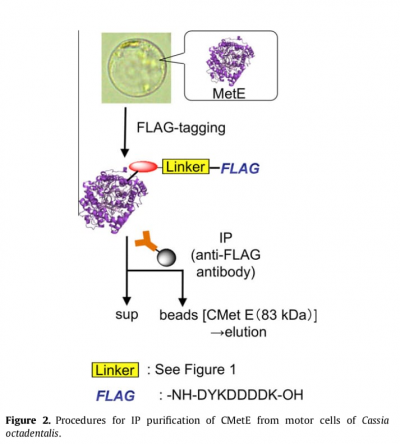 Flag peptide is the peptide sequence of amino acids, which is hydrophilic and has high immunogenicity. These are fusion peptides that are used as tags to detect the target molecule either protein or protein complexes for their rapid purification. It is consisting of almost 8 amino acids (DYKDDDDK) which are sequenced in a specific manner. These flag peptides are of small size; hence they are encoded by a short oligonucleotide sequence. Normally the last 5 sequences of amino acids serve as a specific cleavage site of an enzyme called enterokinase, that in turn allows the removal of the tag peptide. Depending upon the functions or applications of the flag peptide, it may either combine with the N or C terminal of the protein. The N-terminal of the given flag peptide has an affinity to bind with the monoclonal antibodies which are called anti-flag antibodies. The complex which is formed between the flag peptide and the monoclonal antibody is Ca2+ dependent. Which can be broken by any chelating agent like EDTA. Some studies contradict this concept by saying that the fusion between the flag peptide and the monoclonal antibodies M1 (Also called anti-flag antibodies) is not Ca2+ dependent. 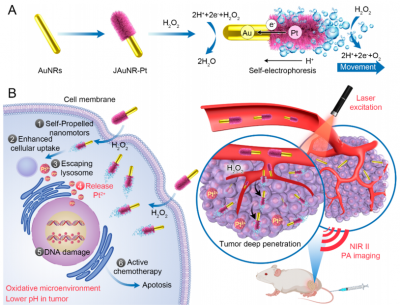 Nanomotors have active locomotion capabilities and thus have great potential for deep tissue imaging and in vivo drug delivery. The use of nanomotors with particle sizes smaller than 100 nm for in vivo imaging and therapy is one of the core innovations in this field. Here, hydrogen peroxide (H2O2)-driven nanoscale Janus gold nanorod-platinum (JAuNR-Pt) nanomotors were used to enhance the effectiveness of NIR-II for area photoacoustic (PA) imaging and tumor therapy in deep tumor tissues . The JAuNR-Pt nanomotors deposited a platinum Pt shell on one end of the gold nanorods with coverages including 10%, 25%, 50%, 75%, and 100%. Among them, the JAuNR-Pt nanomotor with 50% platinum shell coverage exhibits the highest diffusion coefficient (De) and can move rapidly in the presence of hydrogen peroxide. Self-propulsion of JAuNR-Pt nanomotors enhanced cellular uptake, accelerated lysosomal escape, and facilitated sustained release. Cytotoxic Pt2+ ions enter the nucleus, leading to DNA damage and apoptosis. JAuNR-Pt nanomotors exhibited deep penetration and accumulation in tumors and high tumor therapeutic efficacy. Therefore, the findings of this study demonstrate significant tumor imaging and antitumor effects, providing an effective strategy for accurate diagnosis and treatment of the disease.

Lipo3000 is a type of transfection reagent which is lipid-based in nature and used to transfect cells by transporting the complex molecules into the cell. Due to its cationic nature, it is used in a wide variety of techniques i.e. gene expression or gene delivery.

3BDO Successfully Inhibits Glioblastoma Growth in Vitro and in Vivo

Glioblastoma (GBM) is a high-grade glioma characterized by a high rate of invasiveness and rapid growth. Despite advances in surgical and medical treatment modalities, very few patients with GBM survive beyond 15 months after diagnosis. Currently, temozolomide (TMZ) is the main first-line drug for GBM chemotherapy, but it is prone to drug resistance. Therefore, it is urgent to identify other drugs with better efficacy to treat GBM. 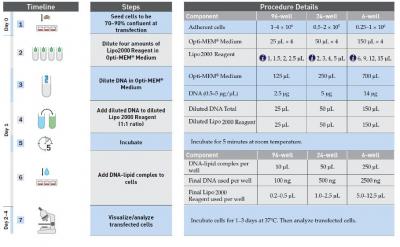 It is a type of reagent that is cationic, liposome-based, and used in a wide variety of in-vitro techniques in mammalian cells for transfection, and transgene expressions. The efficiency of transfection and viability of cell depends upon many factors which are given as follows:

D-Luciferin is basically a substrate for many metabolic enzymes. It is used in different techniques like assays in which it is used to measure luciferase enzymes in the presence of adenosine triphosphate (ATP). Almost all the bioluminescence insects have specific types of luciferase enzymes but all they share a common substrate called D luciferin which is present in almost 40 different species of beetles or firefly insects(White et al., 1963, De Wet et al., 1985). It has a wide variety of applications, but more commonly it is a bioluminescent agent which is used in different in-vivo and in-vitro research related to stem cells, gene expression, growth of cancer, etc.

As we know, in general, reactive Oxygen species (ROS) are essential for the normal biological functions of cells but on other hand, they are also involved in cellular degeneration and tissue death. So, there is a basic need for such chemical or compound which is antioxidant in nature and very specific in its functions to combat the production of ROS (which induces cellular death) without altering the production of normal ROS that are required for cellular functions. That’s why Ferostatin-1 is developed. It is a very potent chemical agent for inhibiting ferroptosis which is defined as an oxidative, somewhat regulated, and nonapoptotic death of a cell.