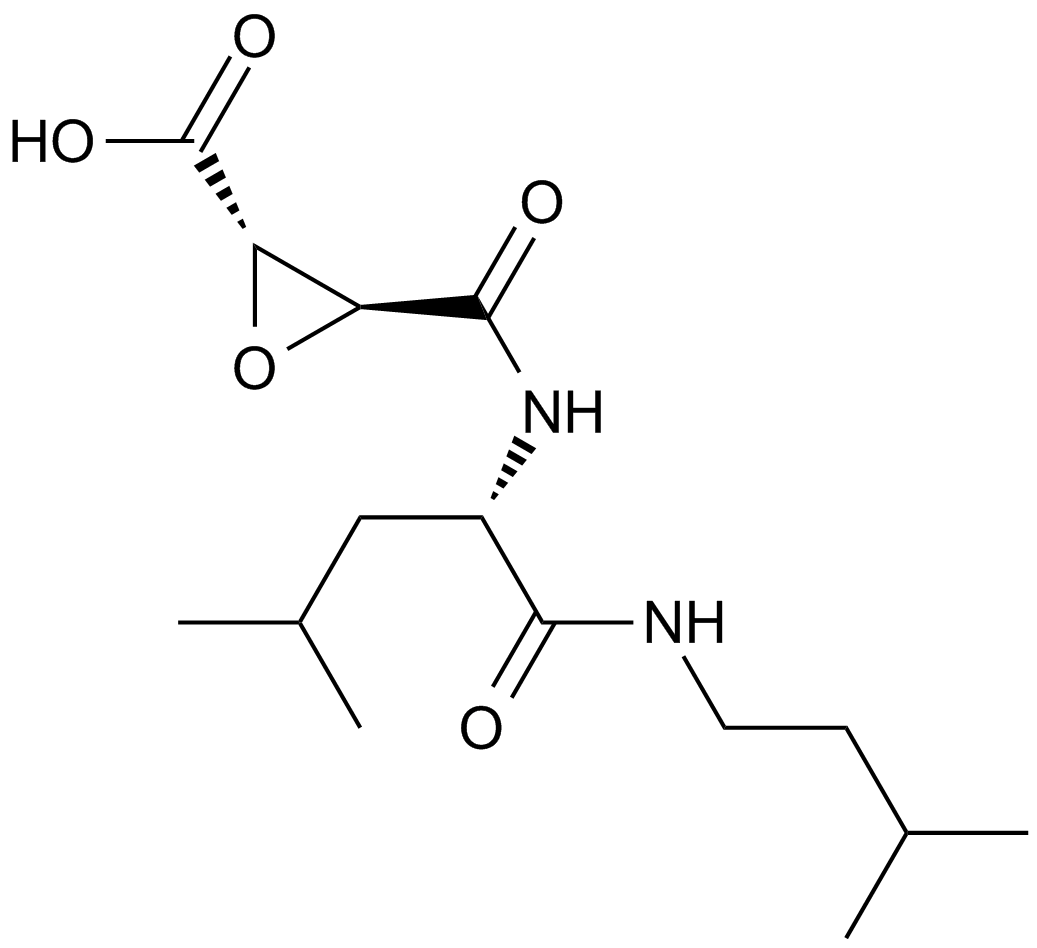 E-64-c, which is also known as Ep-475, is an analog of E-64 and inhibitor of cysteine proteinases. [1]
The cysteine proteinases, of which Cathepsins B and H and cathepsin L exist in mammals, contain an essential highly reactive thiol group, and therefore are inhibited by thiol-blocking reagents such as iodoacetate and mercuribenzoate. E-64-c showed promise of acting as class-specific inhibitors for the cysteine proteinases. X-ray diffraction shows that E-64-c binds to papain through a thioether covalent bond.[1]
E-64-c, which is an analog of E-64, has proved to be substantially more reactive than E-64 with cathepsins B and L. Cathepsins B and H from human liver and rat cathepsin L were used to measure the rate constants of inhibition of E-64-c, which indicated the rate constants of inactivation of cathepsins B, H and L were 298000, 2018, 206000 M-1 s-1 , respectively[2].
E-64-c was injected subcutaneously, in various doses, daily for 80 days into dystrophic chickens, the activities of cathepsin B and cathepsin H were reduced to the levels in control chickens. E-64-c showed dose-dependent activities on inhibiting cathepsin H and B. However, cathepsin D is not sensitive to E-64-c. Moreover, 10 mg/kg per 8 h of an oil emulsion of E-64-c injection reduced protein degradation 20% in muscles from burned rats. E-64c, which also inhibits calpain , was administered at a dose of 400 mg/kg twice a day for 3 days to middle cerebral artery occlusion mice. The MAP2 levels was increased compared to control and the depletion was significantly inhibited.[3,4]
References:
1.Yamamoto D, Matsumoto K, Ohishi H, et al. Refined x-ray structure of papain. E-64-c complex at 2.1-A resolution[J]. Journal of Biological Chemistry, 1991, 266(22): 14771-14777.
2.Barrett A J, Kembhavi A A, Brown M A, et al. L-trans-Epoxysuccinyl-leucylamido (4-guanidino) butane (E-64) and its analogues as inhibitors of cysteine proteinases including cathepsins B, H and L[J]. Biochem. J, 1982, 201: 189-198.
3.Clark A S, Kelly R A, Mitch W E. Systemic response to thermal injury in rats. Accelerated protein degradation and altered glucose utilization in muscle[J]. Journal of Clinical Investigation, 1984, 74(3): 888.
4.Inuzuka T, Tamura A, Sato S, et al. Suppressive effect of E-64c on ischemic degradation of cerebral proteins following occlusion of the middle cerebral artery in rats[J]. Brain research, 1990, 526(1): 177-179.