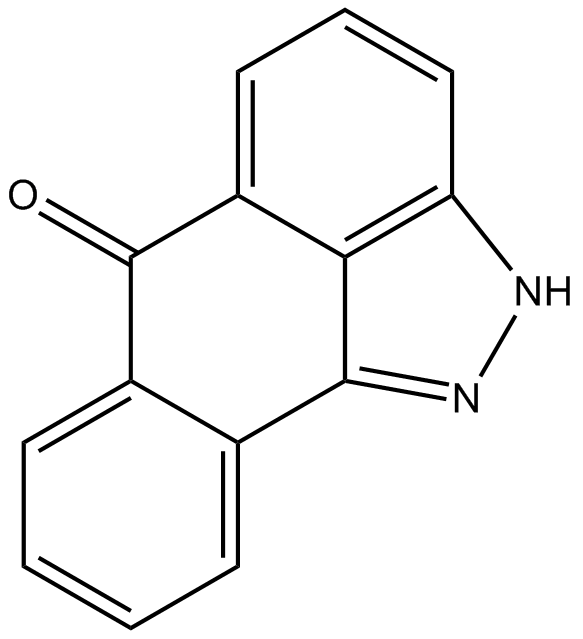 SP600125 was screened out from a time-resolved f luorescence assay using the GST-c-Jun and recombinant human JNK2. In this assay, SP600125 showed a Ki value of 190 nM. SP600125 was also found to inhibit JNK1, 2 and 3 isoforms in the selectivity tests. The selectivity of SP600125 for JNK is 300-fold greater than that for ERK1 and p38-2. In Jurkat T cells, SP600125 suppressed the phosphorylation of c-Jun with IC50 of 5-10 μM. SP600125 also inhibited the expression of IL-2 and IFN-γ in cells stimulated with PMA and phytohemagglutinin, since JNK had been reported to regulate the transcription of IL-2. Besides that, SP600125 exerted differential inhibition of cytokines in CD4+ cells as well as inflammatory genes in monocytes. Moreover, SP600125 administration significantly inhibited TNF-α expression induced by LPS in a mouse model, suggesting that it had efficacy in endotoxin-induced inf lammation in vivo [1].

Titanium dioxide (TiO2 ) is generally regarded as a nontoxic and nongenotoxic white mineral, which is mainly applied in the manufacture of paper, paint, plastic, sunscreen lotion and other products. Recently, TiO2 nanoparticles (TiO2 NPs) have been demonstrated to cause chronic inflammation and lung tumor formation in rats, which may be associated with the particle size of TiO2 . Considering the important role of activator protein-1 (AP-1) in regulating multiple genes involved in the cell proliferation and inflammation and the induction of neoplastic transformation, we aimed to evaluate the potency of TiO2 NPs (≤ 20 nm) on the activation of AP-1 signaling pathway and the generation of reactive oxygen species (ROS) in a mouse epidermal cell line, JB6 cells. MTT, electron spin resonance (ESR), AP-1 luciferase activity assay in vitro and in vivo, and Western blotting assay were used to clarify this problem. Our results indicated that TiO2 NPs dose-dependently caused the hydroxyl radical (·OH) generation and sequentially increased the AP-1 activity in JB6 cells. Using AP-1-luciferase reporter transgenic mice models, an obvious increased AP-1 activity was detected in dermal tissue after exposure to TiO2 NPs for 24 h. Interestingly, TiO2 NPs increased the AP-1 activity via stimulating the expression of mitogen-activated protein kinases (MAPKs) family members, including extracellular signal-regulated protein kinases (ERKs), p38 kinase, and C-Jun N-terminal kinases (JNKs). Of note, the AP-1 activation induced by TiO2 NPs could be blocked by specific inhibitors (SB203580, PD98059, and SP 600125, respectively) that inhibit ERKs and p38 kinase but not JNKs. These findings indicate that ROS generation is involved in TiO2 NPs-induced AP-1 activation mediated by MAPKs signal pathway.

Acute myeloid leukemia (AML) is the most lethal form of leukemia. Standard anti-AML treatment remains almost unchanged for decades. Tingenone (TG) and 22-hydroxytingenone (22-HTG) are quinonemethide triterpenes found in the Amazonian plant Salacia impressifolia (Celastraceae), with cytotoxic properties in different histological types of cancer cells. In the present work, we investigated the anti-AML action mechanism of TG and 22-HTG in the AML HL-60 cell line. Both compounds exhibited potent cytotoxicity in a panel of cancer cell lines. Mechanistic studies found that TG and 22-HTG reduced cell growth and caused the externalization of phosphatidylserine, the fragmentation of internucleosomal DNA and the loss of mitochondrial transmembrane potential in HL-60 cells. In addition, pre-incubation with Z-VAD(OMe)-FMK, a pan-caspase inhibitor, prevented TG- and 22-HTG-induced apoptosis, indicating cell death by apoptosis via a caspase-dependent pathway. The analysis of the RNA transcripts of several genes indicated the interruption of the cellular antioxidant system, including the downregulation of thioredoxin, as a target for TG and 22-HTG. The application of N-acetyl-cysteine, an antioxidant, completely prevented apoptosis induced by TG and 22-HTG, indicating activation of the apoptosis pathway mediated by oxidative stress. Moreover, TG and 22-HTG induced DNA double-strand break and phosphorylation of JNK2 (T183/Y185) and p38α (T180/Y182), and co-incubation with SP 600125 (JNK/SAPK inhibitor) and PD 169316 (p38 MAPK inhibitor) partially prevented apoptosis induced by TG and 22-HTG. Together, these data indicate that TG and 22-HTG are new candidate for anti-AML therapy targeting thioredoxin.