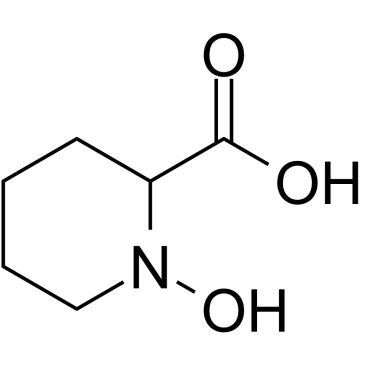 Salicylic acid (SA) has long been known to be essential for basal defense and systemic acquired resistance (SAR). N-Hydroxypipecolic acid(NHP), a recently discovered plant metabolite, also plays a key role in SAR and to a lesser extent in basal resistance. Following pathogen infection, levels of both compounds are dramatically increased. Analysis of SA- or SAR-deficient mutants has uncovered how SA and NHP are biosynthesized. The completion of the SA and NHP biosynthetic pathways in Arabidopsis allowed better understanding of how they are regulated. In this review, we discuss recent progress on SA and NHP biosynthesis and their regulation in plant immunity.

Recent research has established that the pipecolate pathway, a three-step biochemical sequence from l-lysine to N-Hydroxypipecolic acid(NHP), is central for plant systemic acquired resistance (SAR). NHP orchestrates SAR establishment in concert with the immune signal salicylic acid (SA). Here, we outline the biochemistry of NHP formation from l-Lys and address novel progress on SA biosynthesis in Arabidopsis and other plant species. In Arabidopsis, the pathogen-inducible pipecolate and salicylate pathways are activated by common and distinct regulatory elements and mutual interactions between both metabolic branches exist. The mode of action of NHP in SAR involves direct induction of SAR gene expression, signal amplification, priming for enhanced defense activation and positive interplay with SA signaling to ensure elevated plant immunity.

l-lysine catabolic routes in plants include the saccharopine pathway to α-aminoadipate and decarboxylation of lysine to cadaverine. The current review will cover a third l-lysine metabolic pathway having a major role in plant systemic acquired resistance (SAR) to pathogen infection that was recently discovered in Arabidopsis thaliana. In this pathway, the aminotransferase AGD2-like defense response protein (ALD1) α-transaminates l-lysine and generates cyclic dehydropipecolic (DP) intermediates that are subsequently reduced to pipecolic acid (Pip) by the reductase SAR-deficient 4 (SARD4). l-pipecolic acid, which occurs ubiquitously in the plant kingdom, is further N-hydroxylated to the systemic acquired resistance (SAR)-activating metabolite N-Hydroxypipecolic acid(NHP) by flavin-dependent monooxygenase1 (FMO1). N-Hydroxypipecolic acidinduces the expression of a set of major plant immune genes to enhance defense readiness, amplifies resistance responses, acts synergistically with the defense hormone salicylic acid, promotes the hypersensitive cell death response and primes plants for effective immune mobilization in cases of future pathogen challenge. This pathogen-inducible NHP biosynthetic pathway is activated at the transcriptional level and involves feedback amplification. Apart from FMO1, some cytochrome P450 monooxygenases involved in secondary metabolism catalyze N-hydroxylation reactions in plants. In specific taxa, pipecolic acid might also serve as a precursor in the biosynthesis of specialized natural products, leading to C-hydroxylated and otherwise modified piperidine derivatives, including indolizidine alkaloids. Finally, we show that NHP is glycosylated in Arabidopsis to form a hexose-conjugate, and then discuss open questions in Pip/NHP-related research.

Systemic acquired resistance (SAR) is a plant immune response established in uninfected leaves after colonization of local leaves with biotrophic or hemibiotrophic pathogens. The amino acid-derived metabolite N-Hydroxypipecolic acid(NHP) travels from infected to systemic leaves, where it activates salicylic acid (SA) biosynthesis through the isochorismate pathway. The resulting increased SA levels are essential for induction of a large set of SAR marker genes and full SAR establishment. In this study, we show that pharmacological treatment of Arabidopsis thaliana with NHP induces a subset of SAR-related genes even in the SA induction-deficient2 (sid2/isochorismate synthase1) mutant, which is devoid of NHP-induced SA. NHP-mediated induction is abolished in sid2-1 NahG plants, in which basal SA levels are degraded. The SA receptor NON-EXPRESSOR OF PATHOGENESIS-RELATED GENES1 (NPR1) and its interacting TGACG SEQUENCE-SPECIFIC BINDING PROTEIN (TGA) transcription factors are required for the NHP-mediated induction of SAR genes at resting SA levels. Isothermal titration analysis determined a KD of 7.9 ± 0.5 µM for the SA/NPR1 complex, suggesting that basal levels of SA would not bind to NPR1 unless yet unknown potentially NHP-induced processes increase the affinity. Moreover, the nucleocytoplasmic protein PHYTOALEXIN DEFICIENT4 is required for a slight NHP-mediated increase in NPR1 protein levels and NHP-induced expression of SAR-related genes. Our experiments have unraveled that NHP requires basal SA and components of the SA signaling pathway to induce SAR genes. Still, the mechanism of NHP perception remains enigmatic.

This article comments on: