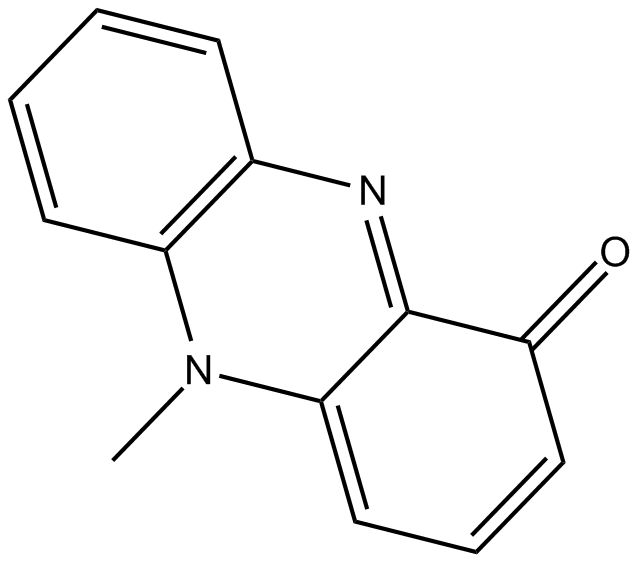 Pyocyanin is a biologically active phenazine pigment produced by the bacterium, Pseudomonas aeruginosa, acting as a nitric oxide (NO) antagonist in various pharmacological preparations and as mediator in biosensors. Pyocyanin can also be used as electron shuttle in microbial fuel cells enabling bacterial electron transfers. Furthermore, Pyocyanin has broad antibiotic activity as well as has been identified as the key molecule produced by Pseudomonas that inhibits growth of pathogenic vibrios in aquaculture systems.[1]

In vivo study demonstrated that Pyocyanin was able to slow the beating of human respiratory tract cilia. The effects of Pyocyanin on tracheal mucus velocity of radiolabeled erythrocytes were tested in anesthetized guinea pigs. The effect of Pyocyanin was slower in onset, 600 ng causing 60% reduction in tracheal mucus velocity at 3 h, and no recovery occurred. Whereas combination of Pyocyanin and 1-hydroxyphenazine produced an initial rapid slowing equivalent to the same dose of 1-hydroxyphenazine given alone, but the later slowing attributed to Pyocyanin was greater than the same dose administered alone. This study demonstrates one mechanism by which products of P. aeruginosa, such as Pyocyanin may facilitate its colonization of the respiratory tract.

The role of pyocyanin in Pseudomonas aeruginosa infection

Pyocyanin (PCN) is a blue redox-active secondary metabolite that is produced by Pseudomonas aeruginosa. PCN is readily recovered in large quantities in sputum from patients with cystic fibrosis who are infected by P. aeruginosa. Despite in vitro studies demonstrating that PCN interferes with multiple cellular functions, its importance during clinical infection is uncertain. This is partially caused by the difficulty in defining the contribution of PCN among the numerous virulence factors produced by P. aeruginosa during infection. In addition, few cellular pathways that are affected by PCN are known. This review briefly highlights recent advances that might clarify the role of PCN in P. aeruginosa pathogenesis.

Electrochemical Detection of Pyocyanin as a Biomarker for Pseudomonas aeruginosa: A Focused Review

Pseudomonas aeruginosa (PA) is a pathogen that is recognized for its advanced antibiotic resistance and its association with serious diseases such as ventilator-associated pneumonia and cystic fibrosis. The ability to rapidly detect the presence of pathogenic bacteria in patient samples is crucial for the immediate eradication of the infection. Pyocyanin is one of PA's virulence factors used to establish infections. Pyocyanin promotes virulence by interfering in numerous cellular functions in host cells due to its redox-activity. Fortunately, the redox-active nature of pyocyanin makes it ideal for detection with simple electrochemical techniques without sample pretreatment or sensor functionalization. The previous decade has seen an increased interest in the electrochemical detection of pyocyanin either as an indicator of the presence of PA in samples or as a tool for quantifying PA virulence. This review provides the first overview of the advances in electrochemical detection of pyocyanin and offers an input regarding the future directions in the field.

Objective: The aim of this study was to evaluate the efficiency of pyocyanin pigment as a novel compound active against tyrosinase with its depigmentation efficiency for combating Trichophyton rubrum which could be a major causative agent of tinea corporis.
Methods: Fifty swabs of fungal tinea corporis infections were collected and identified. Five MDRPA isolates were tested for their levels of pyocyanin production. The purified extracted pyocyanin was characterized by UV spectrum and FT-IR analysis. Pyocyanin activity against tyrosinase was determined by dopachrome micro-plate. In addition, the antidermatophytic activity of pyocyanin against T. rubrum was detected by radial growth technique. In vivo novel trial was conducted to evaluate the efficiency and safety of pyocyanin as an alternative natural therapeutic compound against T. rubrum causing tinea corporis.
Results: Purified pyocyanin showed highly significant inhibitory activity against tyrosinase and T. rubrum. In vivo topical treatments with pyocyanin ointment revealed the efficiency of pyocyanin (MIC 2000 μg/ml) to cure tinea corporis compared to fluconazole, which showed a partial curing at a higher concentration (MIC 3500 μg/ml) after two weeks of treatment. In addition, the results revealed complete healing and disappear of hyperpigmentation by testing the safety of pyocyanin ointment and its histopathological efficiency in the skin treatment without any significant toxic effect.
Conclusion: Pyocyanin pigment could be a promising anti-tyrosinase and a new active compound against T. rubrum, which could be a major causative agent of tinea corporis. In fact, if pyocyanin secondary metabolite is going to be used in practical medication, it will support the continuous demand of novel antimycotic natural agents against troublesome fungal infections.

Colour Me Blue: The History and the Biotechnological Potential of Pyocyanin

Pyocyanin was the first natural phenazine described. The molecule is synthesized by about 95% of the strains of Pseudomonas aeruginosa. From discovery up to now, pyocyanin has been characterised by a very rich and avant-garde history, which includes its use in antimicrobial therapy, even before the discovery of penicillin opened the era of antibiotic therapy, as well as its use in electric current generation. Exhibiting an exuberant blue colour and being easy to obtain, this pigment is the subject of the present review, aiming to narrate its history as well as to unveil its mechanisms and suggest new horizons for applications in different areas of engineering, biology and biotechnology.

Pseudomonas aeruginosa is an opportunistic, Gram-negative bacterium and is one of the most commercially and biotechnologically valuable microorganisms. Strains of P. aeruginosa secrete a variety of redox-active phenazine compounds, the most well studied being pyocyanin. Pyocyanin is responsible for the blue-green colour characteristic of Pseudomonas spp. It is considered both as a virulence factor and a quorum sensing signalling molecule for P. aeruginosa. Pyocyanin is an electrochemically active metabolite, involved in a variety of significant biological activities including gene expression, maintaining fitness of bacterial cells and biofilm formation. It is also recognised as an electron shuttle for bacterial respiration and as an antibacterial and antifungal agent. This review summarises recent advances of pyocyanin production from P. aeruginosa with special attention to antagonistic property and bio-control activity. The review also covers the challenges and new insights into pyocyanin from P. aeruginosa.