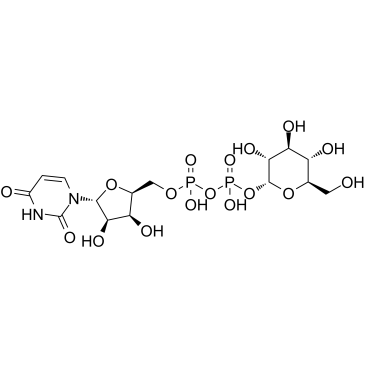 Uridine diphosphate glucose (uracil-diphosphate glucose, UDPG) is a nucleotide sugar. It is used in nucleotide sugar metabolism as an activated form of glucose, a substrate for enzymes called glucosyltransferases. [1] Uridine diphosphate glucose has been shown to have tissue-specific effects that have proved to be of clinical value in the treatment of some liver ailments. It is also known to have multiple effects on intrahepatic bilirubin metabolism which, in turn, are related to the glycogen synthesis occurring in the liver.[2]

In vitro study demonstrated that the effects of UDPG on cell metabolism do not appear to be limited to enzyme induction. Others have reported that UDPG can have effects under conditions that bar enzyme induction. Results showed that a significant amount of the UDPG, even though it is a highly polar compound, does pass through the membrane unchanged. A large fraction of the UDPG added to incubation media, however, was found in the cell as glucose phosphate, indicating cleavage after penetration of the cell. Eventually. all the UDPG that entered the cells was degraded to glucose phosphate and glucose. The in vitro studies show that G-6-P is not the active form, and several tests show that uridine does not lead to changes like those seen with UDPG. [2]

In vivo study indicated that indicate that the intracellular level of PRPP in animal tissues is greatly affected by extracellular UDPG. The alteration of PRPP level by UDPG is not linearly dose-related. The changes in PRPP that were induced by UDPG were also tissue-specific: mouse liver was more sensitive than was the spleen. This latter specificity may well be related to the therapeutically beneficial effects of UDPG.[2]

The recent disproof of a major deficiency of uridine diphosphate galactose in galactosemia should not lead investigators to assume either that enzymatic methods are unreliable for uridine sugar assays or that a defect in galactosylation in galactosemia has been excluded.

The recent disproof of a major deficiency of uridine diphosphate galactose in galactosemia should not lead investigators to assume either that enzymatic methods are unreliable for uridine sugar assays or that a defect in galactosylation in galactosemia has been excluded.

Nucleotide sugars are required for the synthesis of glycoproteins and glycolipids, which play crucial roles in many cellular functions such as cell communication and immune responses. uridine diphosphate glucose (UDP-Glc) was previously believed to be the only nucleotide sugar detectable in brain by 31 P-MRS. Using spectra of high SNR and high resolution acquired at 7 T, we showed that multiple nucleotide sugars are coexistent in brain and can be measured simultaneously. In addition to UDP-Glc, these also include UDP-galactose (UDP-Gal), -N-acetyl-glucosamine (UDP-GlcNAc) and -N-acetyl-galactosamine (UDP-GalNAc), collectively denoted as UDP(G). Coexistence of these UDP(G) species is evident from a quartet-like multiplet at -9.8 ppm (M-9.8 ), which is a common feature seen across a wide age range (24-64 years). Lineshape fitting of M-9.8 allows an evaluation of all four UDP(G) components, which further aids in analysis of a mixed signal at -8.2 ppm (M-8.2 ) for deconvolution of NAD+ and NADH. For a group of seven young healthy volunteers, the concentrations of UDP(G) species were 0.04 ± 0.01 mM for UDP-Gal, 0.07 ± 0.03 mM for UDP-Glc, 0.06 ± 0.02 mM for UDP-GalNAc and 0.08 ± 0.03 mM for UDP-GlcNA, in reference to ATP (2.8 mM). The combined concentration of all UDP(G) species (average 0.26 ± 0.06 mM) was similar to the pooled concentration of NAD+ and NADH (average 0.27 ± 0.06 mM, with a NAD+ /NADH ratio of 6.7 ± 2.1), but slightly lower than previously found in an older cohort (0.31 mM). The in vivo NMR analysis of UDP-sugar composition is consistent with those from tissue extracts by other modalities in the literature. Given that glycosylation is dependent on the availability of nucleotide sugars, assaying multiple nucleotide sugars may provide valuable insights into potential aberrant glycosylation, which has been implicated in certain diseases such as cancer and Alzheimer's disease.

Toxoplasma gondii is an obligate intracellular parasite of the phylum apicomplexa and a common and often life-threatening opportunistic infection associated with AIDS. A family of parasite-specific glycosylphosphatidylinositols containing a novel glucosylated side chain has been shown to be highly immunogenic in humans (Striepen et al. (1997) J. Mol. Biol. 266, 797-813). In contrast to trypanosomes in T. gondii side chain modification takes place before addition to protein in the endoplasmic reticulum. The biosynthesis of these modifications was studied in an in vitro system prepared from hypotonically lysed T. gondii parasites. Radiolabeled glucose-containing glycosylphosphatidylinositol precursors were synthesized by T. gondii membrane preparations upon incubation with uridine diphosphate-[3H]glucose. Synthesis of glucosylated glycolipids took place only in the presence of exogenous uridine diphosphate glucose and was stimulated by unlabeled uridine diphosphate glucose in a dose-dependent manner. In contrast to glycosylphosphatidylinositol mannosylation, glucosylation was shown to be insensitive to amphomycin treatment. In addition, the glucose analogue 2-deoxy-D-glucose was used to trace the glycosylphosphatidylinositol glucosylation pathway. Detailed analysis of glycolipids synthesized in vitro in the presence of UDP and GDP derivatives of D-glucose and 2-deoxy-D-glucose ruled out an involvement of dolichol phosphate-glucose and demonstrates direct transfer of glucose from uridine diphosphate glucose.