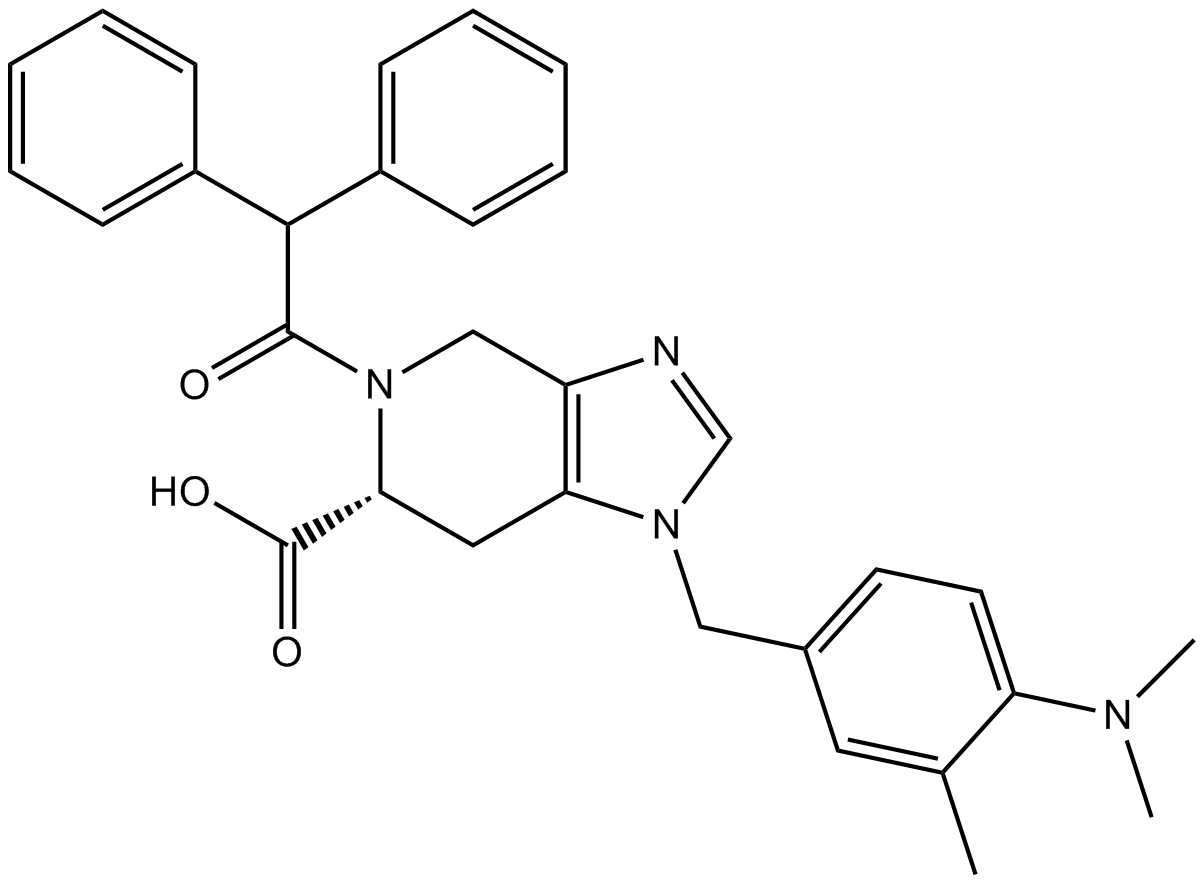 PD123319 is an antagonist of angiotensin II receptor, unlike previous drugs act as inhibitors of the formation of Ang II. PD123319 shows inhibition potency in both rat adrenal and brain binding assay with IC50 values of 34nM and 210nM, respectively. It is found to prevent Ang II from binding the bovine zona glomerulosa microsomal preparation with IC50 value of 6.9nM in the binding assay using microsome. [2,3]. PD123319 inhibited AT2 amplification product from rat pheochromocytoma cells (PC12w) binding to 0.5 nM 125I-[Sar1, Ile8]-Ang II with IC50 values of 1.7±0.2 nM [4] .In addition, it is reported that administration of PD123319 can suppress the generation of cyclic guanosine monophosphate and increase the production of prostaglandin E2[2,3].

Angiotensin II, the main effector of renin angiotensin system, plays an important role in the inflammatory process and most of its effects are mediated through the AT1 receptor activation. However, the knowledge about the AT2 receptor involvement in this process is still evolving. We previously found that in an experimental model of colitis, AT2 receptor activation can contribute to the impairment of the muscle contractility in vitro in the course of inflammation. Here, we investigated the potential alleviating effects of the in vivo treatment of PD123319 (1-[[4-(Dimethylamino)-3-methylphenyl]methyl]-5-(diphenylacetyl)-4,5,6,7- tetrahydro-1H-imidazo[4,5-c]pyridine-6-carboxylic acid ditrifluoroacetate), AT2 receptor antagonist, in 2,4-dinitrobenzene sulfonic acid (DNBS)-induced rat model of colitis. The effects of i.p PD123319 (0.3, 3 and 10 mg/kg) administration to rats subjected to intra-rectal DNBS instillation were investigated. The study revealed that the colon injury and the inflammatory signs were ameliorated by PD123319 when visualized by the histopathological examination. The colon shortening, myeloperoxidase activity, and colonic expression of IL-1β, IL-6 and iNOS were downregulated in a dose-dependent manner in DNBS-induced colitis rats treated with PD123319 and the anti-oxidant defense machinery was also improved. The mechanism of these beneficial effects was found in the ability of PD123319 to inhibit NF-κB activation induced by DNBS. The colonic contractility in inflamed tissues was also improved by PD123319 treatment. In conclusion, our data have demonstrated previously that undescribed proinflammatory effects for the AT2 receptors in DNBS-induced colitis in rats in which they are mediated likely by NF-κB activation and reactive oxygen species generation. Moreover, when the inflammatory process is mitigated by the AT2 receptor antagonist treatment, the smooth muscle is able to recover its functionality.

Our study aimed to determine the effects of losartan and PD123319 in ischemia-reperfusion (IR) injury in isolated perfused rat heart. The study used 40 male Wistar albino rats that were grouped as Control, IR, and IR treatment groups that received losartan (20 mg/kg), PD123319 (20 mg/kg), and losartan+PD123319. The hearts were attached to Langendorff isolated heart system by employing in situ cannulation method, and cardiodynamic parameters were recorded during the experiment. At the end of experiment, hearts were retained for biochemical analysis and all data were statistically evaluated. A partial recovery of cardiodynamic parameters was observed in all treatment groups. A significant increase in oxidative stress parameters were seen in the IR group, whereas all treatment groups exhibited lower increase. Furthermore, levels of all antioxidant parameters were significantly lower in the IR group, but higher in the treatment groups. Effects on all parameters were much more remarkable in the PD123319 group. Levels of angiotensin II and renin were increased (P < 0.001) with IR application and decreased (P < 0.001) with the treatment of both antagonists. In conclusion, treatment of losartan and PD123319 played a cardioprotective role against IR injury, PD123319 being more effective in this protection.

Intervening in angiotensin (Ang)-II type 2 receptor (AT2) signaling may have therapeutic potential for bronchopulmonary dysplasia (BPD) by attenuating lung inflammation and preventing arterial hypertension (PAH)-induced right ventricular hypertrophy (RVH). We first investigated the role of AT2 inhibition with PD123319 (0.5 and 2 mg·kg(-1)·day(-1)) on the beneficial effect of AT2 agonist LP2-3 (5 μg/kg twice a day) on RVH in newborn rats with hyperoxia-induced BPD. Next we determined the cardiopulmonary effects of PD123319 (0.1 mg·kg(-1)·day(-1)) in two models: early treatment during continuous exposure to hyperoxia for 10 days and late treatment starting on day 6 in rat pups exposed postnatally to hyperoxia for 9 days, followed by a 9-day recovery period in room air. Parameters investigated included lung and heart histopathology, fibrin deposition, vascular leakage, and differential mRNA expression. Ten days of coadministration of LP2-3 and PD123319 abolished the beneficial effects of LP2-3 on RVH in experimental BPD. In the early treatment model PD123319 attenuated cardiopulmonary injury by reducing alveolar septal thickness, pulmonary influx of inflammatory cells, including macrophages and neutrophils, medial wall thickness of small arterioles, and extravascular collagen III deposition, and by preventing RVH. In the late treatment model PD123319 diminished PAH and RVH, demonstrating that PAH is reversible in the neonatal period. At high concentrations PD123319 blocks the beneficial effects of the AT2-agonist LP2-3 on RVH. At low concentrations PD123319 attenuates cardiopulmonary injury by reducing pulmonary inflammation and fibrosis and preventing PAH-induced RVH but does not affect alveolar and vascular development in newborn rats with experimental BPD.