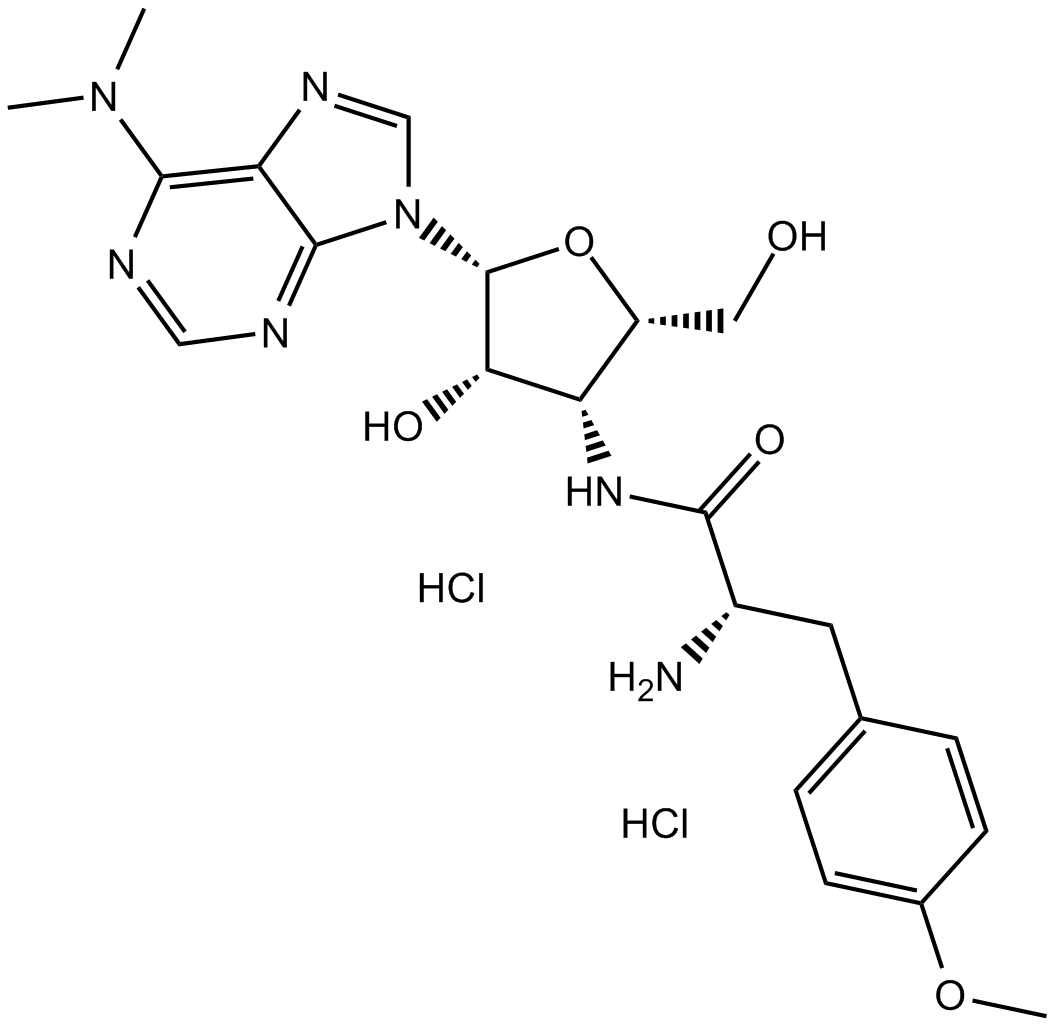 Puromycin dihydrochloride is produced by Streptomyces alboniger, a grampositive actinomycete, through a series of enzymatic reactions.[1] Puromycin dihydrochloride included a nucleoside covalently bound to an amino acid, mimicking the 30 end of aminoacylated tRNAs that participate in delivery of amino acids to elongating ribosomes.[2] It inhibits the growth of animal cells and blocks protein synthesis by binding to 80S ribosomes at low doses.[3]

In vitro study determined the optimal concentration of Puromycin dihydrochloride for selecting EGFPac-transfected cells by performing a Puromycin dihydrochloride resistance test. The puromycin-resistant gene (termed pac) encoding puromycin N-acetyl transferase was isolated from Streptomyces aboniger. If pac is introduced and expressed in animal cells, the cells can survive in the presence of Puromycin dihydrochloride. Results ahowed that it could successfully produce a somatically cloned transgenic piglet using recombinant cells obtained after gene transfer of a transgene (carrying both EGFP and pac expression units) and subsequent in vitro selection with a low concentration (2 mg/ml) of puromycin.[3]

Synthesis of many proteins is tightly controlled at the level of translation, and plays an essential role in fundamental processes such as cell growth and proliferation, signaling, differentiation, or death. Methods that allow imaging and identification of nascent proteins are critical for dissecting regulation of translation, both spatially and temporally, particularly in whole organisms. We introduce a simple and robust chemical method to image and affinity-purify nascent proteins in cells and in animals, based on an alkyne analog of puromycin, O-propargyl-puromycin (OP-puro). OP-puro forms covalent conjugates with nascent polypeptide chains, which are rapidly turned over by the proteasome and can be visualized or captured by copper(I)-catalyzed azide-alkyne cycloaddition. Unlike methionine analogs, OP-puro does not require methionine-free conditions and, uniquely, can be used to label and assay nascent proteins in whole organisms. This strategy should have broad applicability for imaging protein synthesis and for identifying proteins synthesized under various physiological and pathological conditions in vivo.

Ribosome profiling, or Ribo-seq, is based on large-scale sequencing of RNA fragments protected from nuclease digestion by ribosomes. Thanks to its unique ability to provide positional information about ribosomes flowing along transcripts, this method can be used to shed light on mechanistic aspects of translation. However, current Ribo-seq approaches lack the ability to distinguish between fragments protected by either ribosomes in active translation or inactive ribosomes. To overcome this possible limitation, we developed RiboLace, a method based on an original puromycin-containing molecule capable of isolating active ribosomes by means of an antibody-free and tag-free pull-down approach. RiboLace is fast, works reliably with low amounts of input material, and can be easily and rapidly applied both in vitro and in vivo, thereby generating a global snapshot of active ribosome footprints at single nucleotide resolution.

Puromycin reactivity does not accurately localize translation at the subcellular level

Puromycin is a tyrosyl-tRNA mimic that blocks translation by labeling and releasing elongating polypeptide chains from translating ribosomes. Puromycin has been used in molecular biology research for decades as a translation inhibitor. The development of puromycin antibodies and derivatized puromycin analogs has enabled the quantification of active translation in bulk and single-cell assays. More recently, in vivo puromycylation assays have become popular tools for localizing translating ribosomes in cells. These assays often use elongation inhibitors to purportedly inhibit the release of puromycin-labeled nascent peptides from ribosomes. Using in vitro and in vivo experiments in various eukaryotic systems, we demonstrate that, even in the presence of elongation inhibitors, puromycylated peptides are released and diffuse away from ribosomes. Puromycylation assays reveal subcellular sites, such as nuclei, where puromycylated peptides accumulate post-release and which do not necessarily coincide with sites of active translation. Our findings urge caution when interpreting puromycylation assays in vivo.

Background: Translation is an important point of regulation in protein synthesis. However, there is a limited number of methods available to measure global translation activity in yeast. Recently, O-propargyl-puromycin (OPP) labelling has been established for mammalian cells, but unmodified yeasts are unsusceptible to puromycin.
Results: We could increase susceptibility by using a Komagataella phaffii strain with an impaired ergosterol pathway (erg6Δ), but translation measurements are restricted to this strain background, which displayed growth deficits. Using surfactants, specifically Imipramine, instead, proved to be more advantageous and circumvents previous restrictions. Imipramine-supplemented OPP-labelling with subsequent flow cytometry analysis, enabled us to distinguish actively translating cells from negative controls, and to clearly quantify differences in translation activities in different strains and growth conditions. Specifically, we investigated K. phaffii at different growth rates, verified that methanol feeding alters translation activity, and analysed global translation in strains with genetically modified stress response pathways.
Conclusions: We set up a simple protocol to measure global translation activity in yeast on a single cell basis. The use of surfactants poses a practical and non-invasive alternative to the commonly used ergosterol pathway impaired strains and thus impacts a wide range of applications where increased drug and dye uptake is needed.

Objective: To investigate the mechanism through which tacrolimus, often used to treat refractory nephropathy, protects against puromycin-induced podocyte injury.
Methods: An in vitro model of puromycin-induced podocyte injury was established by dividing podocytes into three groups: controls, puromycin only (PAN group), and puromycin plus tacrolimus (FK506 group). Podocyte morphology, number, apoptosis rate and microtubule associated protein 1 light chain 3 alpha (LC3) expression were compared.
Results: Puromycin caused podocyte cell body shrinkage and loose intercellular connections, but podocyte morphology in the FK506 group was similar to controls. The apoptosis rate was lower in the FK506 group versus PAN group. The low level of LC3 mRNA observed in untreated podocytes was decreased by puromycin treatment; however, levels of LC3 mRNA were higher in the FK506 group versus PAN group. Although LC3-I and LC3-II protein levels were decreased by puromycin, levels in the FK506 group were higher than the PAN group. Fewer podocyte autophagosomes were observed in the control and FK506 groups versus the PAN group. Cytoplasmic LC3-related fluorescence intensity was stronger in control and FK506 podocytes versus the PAN group.
Conclusions: Tacrolimus inhibited puromycin-induced mouse podocyte damage by regulating LC3 expression and enhancing autophagy.