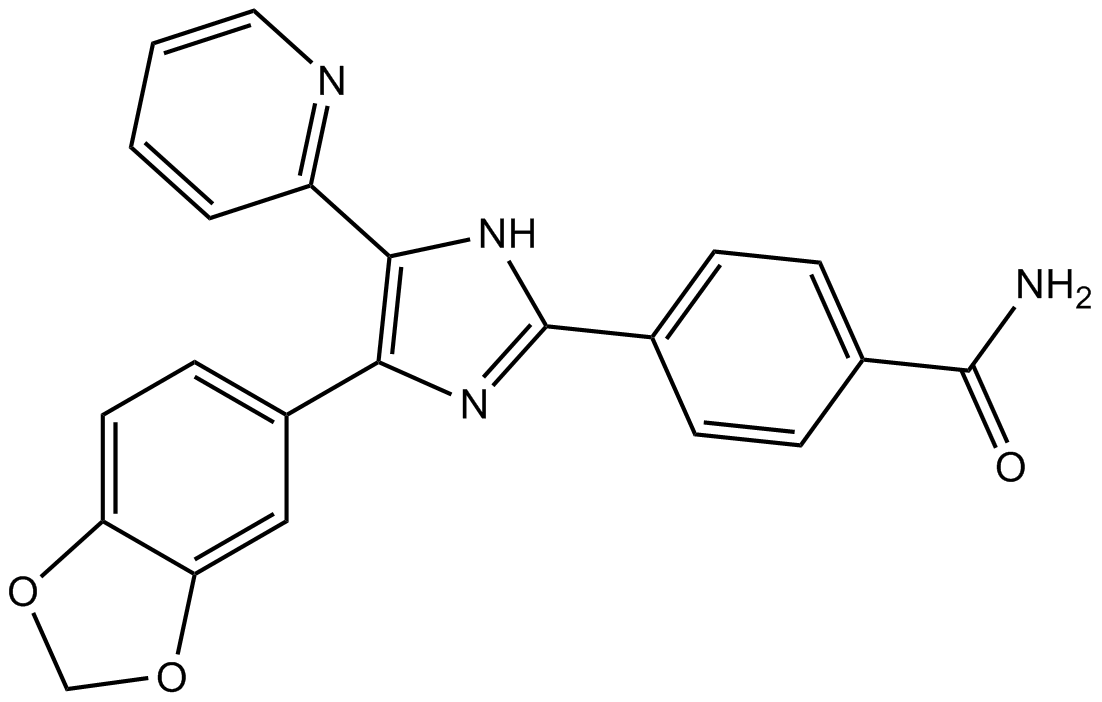 SB-431542, a small molecule inhibitor of the type I TGF-β receptor, blocks intracellular mediators of TGF-1 signaling, which leads to decreased TGF-β1–mediated proliferation, cytokines and collagen expression. In clinical settings, SB-431542 is widely used to treat respiratory asthma, and inhibits proliferation and synthesis of adventitial fibro in the process of pulmonary vascular remodeling.[1]

In vivo study demonstrated that SB-431542 has the capacity to inhibit TGF-β1-induced gene expression. SB-431542 is recognized as a important inhibitor of the TGF-β1 receptors in blocking TGF-β1/Smads signal pathways in vascular remodeling. Moreover, hypoxia-induced vascular remodeling can significantly increase the amount of cytokines and collagen in vascular adventitia. However, after the treatment of SB-431542, attenuation of the fibrosis promoting effects of TGF-β1, including TGF-β1-induced cell proliferation, cell motility, cell migration and cell synthesis were observed. Therefore, it is significant to the identify the potential of SB-431542 for the treatment of hypoxia-induced pulmonary hypertension.[2]

Fibrosis of the knee is a common disorder resulting from an aberrant wound healing response and is characterized by extracellular matrix deposition, joint contraction, and scar tissue formation. The principal regulator of the fibrotic cascade is transforming growth factor beta-1 (TGF-β1), a factor that induces rapid proliferation and differentiation of resident fibroblasts. In this study, we demonstrate successful inhibition of TGF-β1-driven myofibroblastic differentiation in human fibroblast-like synoviocytes using a small molecule TGF-β1 receptor inhibitor, SB-431542. We also demonstrate successful encapsulation of SB-431542 in poly(D,L-lactide-co-glycolide) (PLGA) as a potential prophylactic treatment for arthrofibrosis and characterize drug release and bioactivity in a three-dimensional collagen gel contraction assay. We assessed the effects of TGF-β1 and SB-431542 on cell proliferation and viability in monolayer cultures. Opposing dose-dependent trends were observed in cell proliferation, which increased in TGF-β1-treated cultures and decreased in SB-431542-treated cultures relative to control (p < 0.05). SB-431542 was not cytotoxic at the concentrations studied (0-50 μM) and inhibited TGF-β1-induced collagen gel contraction in a dose-dependent manner. Specifically, TGF-β1-treated gels contracted to 18% ± 1% of their initial surface area, while gels treated with TGF-β1 and ≥10 μM SB-431542 showed no evidence of contraction (p < 0.0001). Upon removal of the compound, all gels contracted to control levels after 44 h in culture, necessitating sustained delivery for prolonged inhibition. To this end, SB-431542 was encapsulated in PLGA microspheres (SBMS) that had an average diameter of 87.5 ± 24 μm and a loading capacity of 4.3 μg SB-431542 per milligram of SBMS. Functional assessment of SBMS revealed sustained inhibition of TGF-β1-induced gel contraction as well as hallmark features of myofibroblastic differentiation, including α-smooth muscle actin expression and connective tissue growth factor production. These results suggest that SB-431542 may be used to counter TGF-β1-driven events in the fibrotic cascade in the knee cartilage. Impact statement Arthrofibrosis is the most prevalent comorbidity resulting from orthopedic procedures such as total knee arthroplasty that is characterized by excess deposition and accumulation of extracellular matrix. Despite its prevalence, treatments are generally palliative, and there is no effective prophylactic therapy. We report that the small molecule transforming growth factor beta-1 (TGF-β1) receptor inhibitor, SB-431542, can inhibit the TGF-β1-driven myofibroblastic differentiation of fibroblast-like synoviocytes. To provide sustained inhibition, we explored the use of SB-laden microspheres as a prophylactic therapy in a three-dimensional contraction model of fibrosis and propose that such therapies will have the potential to improve the standard of care for arthrofibrosis.

Purpose: To explore the inhibitive effect of SB-431542 (an ALK5 inhibitor) on scar formation after glaucoma surgery and to identify the potential pharmacologic target(s).
Methods: Twenty-four New Zealand rabbits underwent filtration surgery on the right eye and were divided into a control group and three experimental groups (n=6). Human Tenon's fibroblast monolayer was scraped to generate a single gap, and then the control medium with SB-431542 only or containing 10 microg/L TGF-beta1 and SB-431542 (1-20 microM) was added. The cells were pretreated with SB-431542 or in control medium for 30 minutes before induction with 10 microg/L TGF-beta1 or 1 microg/L TGF-beta2. The expression of alpha-SM-actin, CTGF, and Col I, as well as changes in the Smad, ERK, P38, and AKT signaling pathways were detected.
Results: In comparison with the control rabbits, the IOPs in the experimental groups remained at lower levels until day 25 (P<0.05) after the surgery. Histologic profiles showed that there was only a mild deposition of collagen in the subconjunctival space in the experimental groups. The cell growth and migration were inhibited effectively by SB-431542, regardless of whether TGF-beta was present in the culture system. SB-431542 abrogated TGF-beta-induced upregulation of alpha-SM-actin, CTGF, and Col I. It effectively inhibited the phosphorylation of Smad2 stimulated by TGF-beta but not that of the components of the MAPK pathways.
Conclusions: SB-431542 inhibits scar formation after glaucoma filtration surgery. The mechanism may be that SB-431542 interferes in the phosphorylation of Smad2, thus abrogating TGF-beta-induced fibroblast transdifferentiation and then decreasing Col I synthesis.

The vascular remodeling process plays an important role in the pathology of hypoxia-induced pulmonary hypertension, and it includes cell proliferation, cell motility, cell synthesis and collagen coagulation. Due to their proliferation and synthesis ability, the adventitial fibroblasts are thought to be critical in the vascular remodeling process initiated in response to hypoxia. However, the factors driving hypoxia-induced fibroblast proliferation and synthesis have yet to be elucidated, and the treatment regimens to treat hypoxia remain ineffective. As forthis study, its purpose was to examine the effects exerted by SB-431542, a small-molecule antagonist of transforming growth factor-β-receptor, on the proliferation, synthesis and collagen coagulation in cultured adventitial fibroblasts. Another aim of this study was to assess the inhibitory ability of SB-431542 on pulmonary vascular remodeling in chronic hypoxia in vivo.The cell morphology and proliferation of cultured adventitial fibroblasts was assessed by laser confocal microscopy and the MTT assay, respectively. Additionally, collagen synthesis was determined by hydroxyproline chromatography, while the expression of cytokines in adventitial fibroblasts and lung tissues was evaluated by immunohistochemical and reverse transcription PCR analyses. The results indicated that the exposure of cultured fibroblasts to 1% oxygen led to the up regulation of cell proliferation, cell synthesis. In addition, increased expression of cytokines and collagen was detected in vivo in the pulmonary artery adventitia of rats exposed to chronic hypoxia. Conversely, SB-431542 inhibited fibroblast proliferation and synthesis in the process of hypoxia-induced pulmonary hypertension (P < 0.01). Thus, the results suggested that by reducing cell proliferation, cell synthesis of vascular adventitia, small molecule inhibitors of the TGF-β1 receptors may offer a novel therapy for pulmonary hypertension.

The antiinflammatory cytokine transforming growth factor beta (TGF-beta) plays an important role in Chagas disease, a parasitic infection caused by the protozoan Trypanosoma cruzi. In the present study, we show that SB-431542, an inhibitor of the TGF-beta type I receptor (ALK5), inhibits T. cruzi-induced activation of the TGF-beta pathway in epithelial cells and in cardiomyocytes. Further, we demonstrate that addition of SB-431542 greatly reduces cardiomyocyte invasion by T. cruzi. Finally, SB-431542 treatment significantly reduces the number of parasites per infected cell and trypomastigote differentiation and release. Taken together, these data further confirm the major role of the TGF-beta signaling pathway in both T. cruzi infection and T. cruzi cell cycle completion. Our present data demonstrate that small inhibitors of the TGF-beta signaling pathway might be potential pharmacological tools for the treatment of Chagas disease.