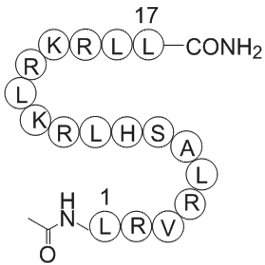 COG 133, (C97H181N37O19), a peptide with the sequence Ac-Leu-Arg-Val-Arg-Leu-Ala-Ser-His-Leu-Arg-Lys-Leu-Arg-Lys-Arg-Leu-Leu-amide,MW= 2169.73.Apolipoprotein E (ApoE) is 299 amino acids long and transports lipoproteins1, fat-soluble vitamins, and cholesterol into the lymph system and then into the blood. It is synthesized principally in the liver, but has also been found in other tissues such as the brain, kidneys, and spleen. In the nervous system, non-neuronal cell types, most notably astroglia and microglia, are the primary producers of APOE, while neurons preferentially express the receptors for APOE. There are seven currently identified mammalian receptors for APOE which belong to the evolutionarily conserved low density lipoprotein receptor gene family.APOE was initially recognized for its importance in lipoprotein metabolism and cardiovascular disease2. Defects in APOE result in familial dysbetalipoproteinemia aka type III hyperlipoproteinemia (HLP III), in which increased plasma cholesterol and triglycerides are the consequence of impaired clearance of chylomicron, VLDL and LDL remnants[citation needed]. More recently, it has been studied for its role in several biological processes not directly related to lipoprotein transport, including Alzheimer's disease (AD), immunoregulation, and cognition3.