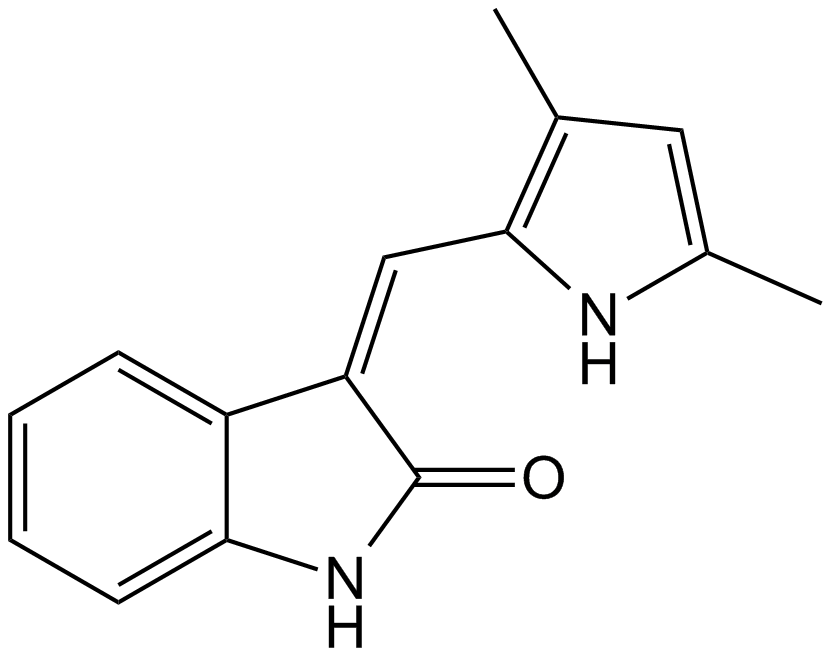 SU5416 is a potent small molecule vascular endothelial growth factor receptor (VEGFR) inhibitor. SU5416 is a 3-substituted indolin-2-one compound with relatively high specificity for VEGFR-2 and VEGFR-1, used extensively in animal models of PH, primarily due to effects on pulmonary vascular endothelial cell apoptosis and proliferation.[1] SU416 has been developed for the treatment of solid human tumors as well. [3]

SU5416 plus hypoxia but not selective VEGFR2 inhibition with cabozantinib plus hypoxia induces pulmonary hypertension in rats: potential role of BMPR2 signaling

Background and aim: A potent and selective vascular endothelial growth factor receptor (VEGFR) inhibitor SU5416, has been developed for the treatment of solid human tumors. The binding of VEGF to VEGFR plays a crucial role in the pathophysiology of respiratory disorders. However, the impact of SU5416 on lipopolysaccharide (LPS)-induced acute lung injury (ALI) remains unclear. Thus, this study aimed to illuminate the biofunction of SU5416 in the mouse model of ALI. Methods: Wild-type (WT) and toll-like receptor 4 (TLR4)-deﬁcient (TLR4-/-) C57BL/6 mice were used to establish LPS-induced ALI model. The primary pulmonary microvascular endothelial cell (PMVEC) was extracted for detection of endothelial barrier function. Results: LPS significantly increased the number of inflammatory cells and inflammatory cytokines in bronchoalveolar lavage fluid (BALF). In addition, LPS increased alveolar epithelial cells injury, inflammation infiltration and vascular permeability of PMVEC in WT and TLR4-/- mice. Western blotting experiment indicated VEGF/VEGFR and TLR4/NF-κB pathways were involved in the progression of LPS-stimulated ALI. Consistent with previous research, dexamethasone treatment appeared to be an effective therapeutic for mice with ALI. Moreover, treatment with SU5416 dramatically attenuated LPS-induced immune responses in mice lung tissues via inhibiting VEGF/VEGFR and TLR4/NF-κB pathways. Finally, SU5416 also decreased vascular permeability of PMVEC in vitro. Conclusion: SU5416 ameliorated alveolar epithelial cells injury and histopathological changes in mice lung via inhibiting VEGF/VEGFR and TLR4/NF-κB signaling pathways. We also confirmed that SU5416 could restrain vascular permeability in PMVEC through improving the integrity of endothelial cell. These findings suggested that SU5416 may serve as a potential agent for the treatment of patients with ALI.

Several lines of evidence indicate that vascular endothelial growth factor (VEGF) plays a prosurvival and antiapoptotic role in endothelial cells. SU5416 is the first VEGF receptor 2 inhibitor to enter clinical development for cancer therapy. A phase I/II study of SU5416 has been completed, and the results show that SU5416 is well tolerated in patients with terminal cancers. It has been shown that VEGF receptor blockade using SU5416 combined with chronic hypoxia results in severe angioproliferative pulmonary hypertension (PAH) with neointimal changes in adult rats. Although classic animal models of pulmonary hypertension (that is, the monocrotaline and hypoxic models) do not form obstructive intimal lesions in the peripheral pulmonary arteries, the SU5416 model has shown pulmonary arterial changes resembling plexiform lesions. Therefore, the SU5416 model of PAH has been used for some time, and it has thus contributed to a better understanding of the pulmonary hypertensive process. However, the mechanism by which SU5416 combined with chronic hypoxia can result in PAH with plexiform-like lesions in adult rats is complex and still remains to be fully elucidated. The most likely explanation is that there is increased apoptosis of endothelial cells in response to the loss of the survival signaling, creating conditions favoring the emergence of apoptosis-resistant cells with increased growth potential, that is, the endothelial cell hyperproliferation that might characterize the plexiform lesions of human PAH. The aim of the present review is to provide information useful for understanding a potent inhibitor of VEGF receptor tyrosine kinase, SU5416, and to better understand its use for generating animal models of PAH.