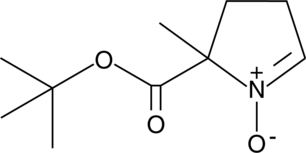 BMPO is a cyclic nitrone spin trap agent, it is a water-soluble white solid which makes BMPO purification easier than other spin trap agents. Even after prolonged storage at 220°C, there was no artificial signal formation from aqueous solutions containing BMPO (25–100 mM). BMPO offers several advantages over the existing spin traps in the detection and characterization of thiyl radicals, hydroxyl radicals, and superoxide anions in biological systems. One of the perceived advantages of BMPO is that the BMPO/•OOH adduct does not readily decay nonenzymatically to the BMPO/•OH adduct. [1]

The in vitro experiment took advantage of Rabbit aortic segments, which were treated with ADR and incubation with 0.1 M BMPO, a novel solid superoxide spin trap. Results showed that BMPO-hydroxyl radical adduct was detected in supernatants upon 10-min incubation of aortic segment with incremental doses of ADR.[2] Time-dependent changes in the ESR spectra of superoxide adducts of BMPO was generated in a xanthine/xanthine oxidase incubation system. BMPO superoxide adducts did not decay to the corresponding hydroxyl adducts. Results also indicate that the BMPO superoxide adduct is persistent. The decay kinetics of BMPO/•OOH also demonstrate this feature. In this system, the ESR spectrum of the BMPO/•OOH adduct could be detected even up to 35 min. Although BMPO/•OOH is intrinsically more stable, it is likely to be enzymatically reduced to BMPO/•OH in biological systems.[1]

BMPO-OOH Spin-Adduct as a Model for Study of Decomposition of Organic Hydroperoxides and the Effects of Sulfide/Selenite Derivatives. An EPR Spin-Trapping Approach

Lipid hydroperoxides play an important role in various pathophysiological processes. Therefore, a simple model for organic hydroperoxides could be helpful to monitor the biologic effects of endogenous and exogenous compounds. The electron paramagnetic resonance (EPR) spin-trapping technique is a useful method to study superoxide (O2•-) and hydroxyl radicals. The aim of our work was to use EPR with the spin trap 5-tert-butoxycarbonyl-5-methyl-1-pyrroline-N-oxide (BMPO), which, by trapping O2•- produces relatively stable •BMPO-OOH spin-adduct, a valuable model for organic hydroperoxides. We used this experimental setup to investigate the effects of selected sulfur/selenium compounds on •BMPO-OOH and to evaluate the antioxidant potential of these compounds. Second, using the simulation of time-dependent individual BMPO adducts in the experimental EPR spectra, the ratio of •BMPO-OH/•BMPO-OOH-which is proportional to the transformation/decomposition of •BMPO-OOH-was evaluated. The order of potency of the studied compounds to alter •BMPO-OOH concentration estimated from the time-dependent •BMPO-OH/•BMPO-OOH ratio was as follows: Na2S4 > Na2S4/SeO32- > H2S/SeO32- > Na2S2 ~Na2S2/SeO32- ~H2S > SeO32- ~SeO42- ~control. In conclusion, the presented approach of the EPR measurement of the time-dependent ratio of •BMPO-OH/•BMPO-OOH could be useful to study the impact of compounds to influence the transformation of •BMPO-OOH.

The short lifetime of superoxide and the low rates of formation expected in vivo make detection by standard continuous wave (CW) electron paramagnetic resonance (EPR) challenging. The new rapid-scan EPR method offers improved sensitivity for these types of samples. In rapid-scan EPR, the magnetic field is scanned through resonance in a time that is short relative to electron spin relaxation times, and data are processed to obtain the absorption spectrum. To validate the application of rapid-scan EPR to spin trapping, superoxide was generated by the reaction of xanthine oxidase and hypoxanthine with rates of 0.1-6.0 μM/min and trapped with 5-tert-butoxycarbonyl-5-methyl-1-pyrroline-N-oxide (BMPO). Spin trapping with BMPO to form the BMPO-OOH adduct converts the very short-lived superoxide radical into a more stable spin adduct. There is good agreement between the hyperfine splitting parameters obtained for BMPO-OOH by CW and rapid-scan EPR. For the same signal acquisition time, the signal/noise ratio is >40 times higher for rapid-scan than for CW EPR. Rapid-scan EPR can detect superoxide produced by Enterococcus faecalis at rates that are too low for detection by CW EPR.

Here we report the structural characterization of the product formed from the reaction between hydroethidine (HE) and superoxide (O(2)(.-)). By using mass spectral and NMR techniques, the chemical structure of this product was determined as 2-hydroxyethidium (2-OH-E(+)). By using an authentic standard, we developed an HPLC approach to detect and quantitate the reaction product of HE and O(2)(.-) formed in bovine aortic endothelial cells after treatment with menadione or antimycin A to induce intracellular reactive oxygen species. Concomitantly, we used a spin trap, 5-tert-butoxycarbonyl-5-methyl-1-pyrroline N-oxide (BMPO), to detect and identify the structure of reactive oxygen species formed. BMPO trapped the O(2)(.-) that formed extracellularly and was detected as the BMPO-OH adduct during use of the EPR technique. BMPO, being cell-permeable, inhibited the intracellular formation of 2-OH-E(+). However, the intracellular BMPO spin adduct was not detected. The definitive characterization of the reaction product of O(2)(.-) with HE described here forms the basis of an unambiguous assay for intracellular detection and quantitation of O(2)(.-). Analysis of the fluorescence characteristics of ethidium (E(+)) and 2-OH-E(+) strongly suggests that the currently available fluorescence methodology is not suitable for quantitating intracellular O(2)(.-). We conclude that the HPLC/fluorescence assay using HE as a probe is more suitable [corrected] for detecting intracellular O(2)(.-).