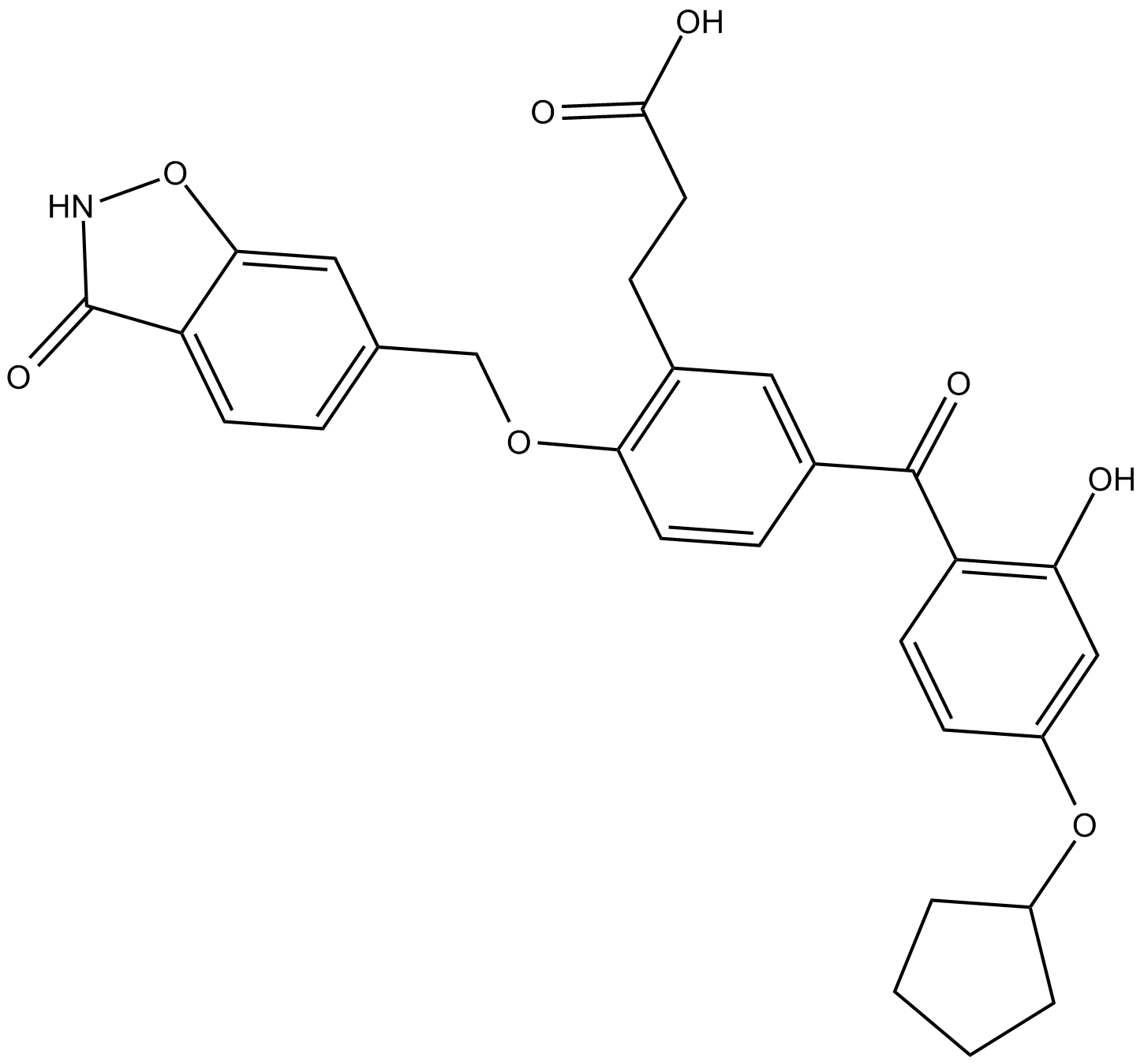 T-5224 is a non-peptidic small molecule AP-1 inhibitor that specifically inhibits the binding of AP-1 to the AP-1 binding site of the promoter region and was originally developed as an anti-inflammatory drug for the treatment of rheumatoid arthritis (RA) suppressing inflammatory cytokines and MMPs without any side-effects.[1]

In vitro study indicated that transcriptional inhibition of the expression of MMPs by T-5224 is not limited to tumor cells only; it also occurs in the ECM of the surrounding tissue, and consequently, inhibits tumor cells from infiltrating the surrounding tissue. In addition, T-5224 potently inhibits the essential steps of metastasis, infiltration through the basement membrane barrier and migration into the ECM, by transcriptionally suppressing the expression of MMP-2 and -9.[1]

Background: High-grade serous ovarian carcinoma (HGSOC) is the most common and aggressive histotype of epithelial ovarian cancer. The heterogeneity and molecular basis of this disease remain incompletely understood.
Methods: To address this question, we have performed a single-cell transcriptomics analysis of matched primary and metastatic HGSOC samples.
Results: A total of 13 571 cells are categorized into six distinct cell types, including epithelial cells, fibroblast cells, T cells, B cells, macrophages, and endothelial cells. A subset of aggressive epithelial cells with hyperproliferative and drug-resistant potentials is identified. Several new markers that are highly expressed in epithelial cells are characterized, and their roles in ovarian cancer cell growth and migration are further confirmed. Dysregulation of multiple signaling pathways, including the translational machinery, is associated with ovarian cancer metastasis through the trajectory analysis. Moreover, single-cell regulatory network inference and clustering (SCENIC) analysis reveals the gene regulatory networks and suggests the JUN signaling pathway as a potential therapeutic target for treatment of ovarian cancer, which is validated using the JUN/AP-1 inhibitor T-5224. Finally, our study depicts the epithelial-fibroblast cell communication atlas and identifies several important receptor-ligand complexes in ovarian cancer development.
Conclusions: This study uncovers new molecular features and the potential therapeutic target of HGSOC, which would advance the understanding and treatment of the disease.

Previous studies have shown that expression of activator protein-1 (AP-1) family is significantly elevated in triple-negative breast cancer (TNBC), compared with that in other breast cancer subtypes. Here we investigated the anti-tumor effect and mechanism of T-5224, an inhibitor of c-Fos/AP-1, on TNBC. We identified that T-5224 inhibited the proliferation, migration, and invasion of TNBC cells and resulted in an increase in apoptosis. Furthermore, we found that OLFML2A is a key regulatory protein acting downstream of AP-1 and is involved in T-5224-targeted AP-1 action. Multiple clinical databases online have identified that high OLFML2A level is associated with poor prognosis in TNBC patients. In summary, our experimental and bioinformatic studies indicated that OLFML2A is necessary for AP-1-overexpressing TNBC. These findings demonstrate that AP-1-overexpressing TNBC dependent on OLFML2A, and targeting both AP-1 and OLFML2A through T-5224 may be a synergistic therapeutic strategy for this clinically challenging subset of breast cancer.

Activator protein-1 (AP-1) is a transcriptional factor that regulates the expression of various genes associated with tumor invasion and migration. The purpose of our study was to assess the therapeutic effects of a novel selective AP-1 inhibitor, T-5224, in preventing lymph node metastasis in head and neck squamous cell carcinoma (HNSCC) in an orthotopic mouse model. We assessed the effect of T-5224 on HNSCC cell invasion, migration, proliferation, and MMP activity by carrying out an in vitro study using an invasion assay, scratch assay, WST-8 assay, and gelatin zymography. We also observed morphological changes in HNSCC cells by time-lapse microscopy. Furthermore, cervical lymph node metastasis was assessed using an orthotopic tumor model of human oral squamous cell carcinoma cells (HSC-3-M3) injected in the tongue of a BALB/c nude mouse. T-5224 (150 mg/kg) or vehicle was given orally every day for 4 weeks. Animals were killed and assessed for lymph node metastasis by H&E staining of resected lymph nodes. T-5224 significantly inhibited the invasion, migration, and MMP activity of HNSCC cells in a dose-dependent manner; there was no significant influence on cell proliferation. The antimetastatic effect of T-5224 was also confirmed in our animal study. The rate of cervical lymph node metastasis in the model was 40.0% in the T-5224-treated group (n = 30) versus 74.1% in the vehicle-treated group (n = 27; P < 0.05). In conclusion, T-5224 inhibited the invasion and migration of HNSCC cells in vitro, and prevented lymph node metastasis in head and neck cancer in an animal model.